The King of Fighters XIII/Kyo Kusanagi 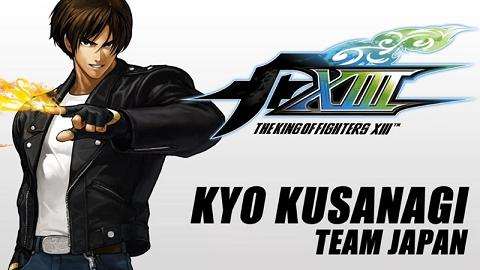 - B version of 75 Shiki Kai (236K) can now be followed up with other attacks. On the ground you can only follow up with an uppercut, but on a mid-air hit you can do more interesting things.

- Added an EX version for his mid-air Orochinagi. It does 3 hits and 300 damage. Unlike the ground version it has no invincibility but is very fast, so you can use it in combos or in air-to-air battles.

Yamamoto – "The air Orochinagi which he learned in KOF Sky Stage (laughs) and now the EX version on top of that has made him a master of the move. It’s now possible to do high damage combos off of a hit confirm with his 3D > 236D combo. Please try him out now that he has so many more attack options."

Kyo is a very noteworthy character with many powerful options to exploit during game play. He is a versatile character who has the tools to zone the opponent and/or rush the opponent down. He can also punish jump-ins very well with his Oniyaki (623P), EX Oborogurma (421BD) but can also carry his opponent across the screen with moves such as 75 Shiki (236K) and Oborogurma (421K). His HD combos involve him using most of his moveset to get the most damaging combo out possible whether it's midscreen or in the corner. His play-style tends to be favored by people looking for someone who is flashy but at the same time isn't too difficult to learn.

Compared to alternate version NESTS Kyo, this version of Kyo is a bit more reliant on scoring easy hard knockdowns to set up either a safe jump option, a high/low okizeme mix-up or using his j.2C for some annoying cross-ups. He has stronger long range options using is 236P for zoning, and his NeoMax which can punish opponents at full screen. His HD combos are a bit more flashier and juggle-heavy which may require a fair amount of execution to pull off consistently but they are very damaging. His mid-range game both offensively and defensively are somewhat lacking in proper tools and options compared to NESTS Kyo, but long-range and close range potential can still make him a highly valid threat.

Note: A jump or hop attack can be added on to many of these combos for added damage, if not noted. Besides starting the combos with cl.C, 3D (1), alternatively you can start with a 2B, 2A, 3D (1)

The stand C resets them briefly mid-air at neutral hop level. You can use this to bait a reversal, hit them with a low attack (cr.B) or an overhead (either f+B or a hop j.B, j.2C), or throw them a normal throw or his EX hcb+K.

12.) qcf+BD > st. A - 4 frame gap between qcf+BD and st. A. St. A whiffs on crouching opponents, except on Daimon, Raiden, and Maxima when they are in guard position.

Evading Projectiles and Certain Moves with df+D, cr. B, and cr. D

Kyo's df+D, cr. B, and cr.D gives him a rather low profile which can be useful to evade certain projectiles, special moves, normals and command moves.