The King of Fighters XIII/Goro Daimon 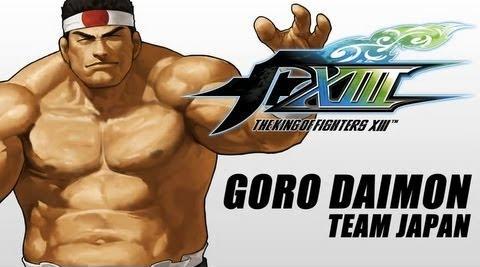 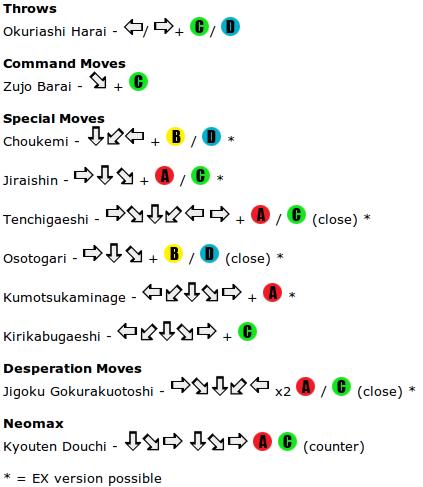 - Kirikabugaeshi’s (qcf+C) recovery time on a whiff has been reduced. Doesn’t cause a knockback when blocked.

Producer Yamamoto says: "As a judo fighter, we’ve strengthened his grab attacks. You need to super cancel, but he can combo his Jigoku-Gokurakuotoshi from all sorts of grab attacks. He can even do HD combos with just grab attacks, so please try them out."

far A: 30 damage, hits mid. Goro steps forward slightly with a fast palm thrust at shoulder height. In previous KOF games, the reach was much farther but it is slightly reduced in this game. It is best used for zoning against hops and stopping those blindly running towards you. It is neutral on block but it isn't as fast as other characters far A's. Overall, a great normal to use often to regulate space and stop hops.

s.A: 30 damage, chain/cancel-able, hits mid. A quick jab to the gut that you can combo into. It's range is rather short, so you must be fairly close to the opponent for it to active. Good use to mix up between using is s.B since that attack hits low

s.B: 40 damage, cancel-able, hits low. Goro pokes out his foot aiming to his opponents shins. One of his best normals because it is fast, has a great range, hits low, and you can combo from it if you are close enough. A great poke that is important to Goro's offense.

far C: 80 damage, hits mid. Somewhat of a fierce, slow push looking attack that hits at a shoulder height. It's best used as a preemptive anti-air at mid-range because it is great at stopping hyper hops in advance. The only drawback to this move is it's start up is rather slow and he is open to low attacks during the animation, so use this carefully.

s.C: 80 damage, cancelable, hits mid. A quick backfist to the midscreen that is neutral on block. It will probably be used more as a first or second hit for a few of his combos. It is a good normal to throw out in close range next to his s.B for a mid/low mix up.

s.D: 90 damage, hits mid. This move retains its usefulness and attributes from past games as being a very good anti-air move, both for those hopping or jumping in, or stuffing attempted jumps from cornered opponents. It still can be stuffed by some jumpins if you don't time it correctly and it still has a fair amount of recovery if whiffed, so exercise caution when using this move.

d. A: 25 damage, cancelable, hits mid. A great low palm thrust that has a small amount of less range than his s.A but it is still good to use together with his s.B, and you can cancel it into his df+C as well. It is also neutral on block which can be good on offensive for baiting the opponent movements when they leave block stun.

d. B: 30 damage, hits low. Goro crouches and pokes his foot out hitting the opponents toes. The range isn't as a far as his s.B, and you can't cancel this kick into anything else, but it seems to have more plus frames, which can be good for offensive pressure.

d. C: 80 damage, cancelable, hit mid. This is a good alternative to his s.C which can be vulnerable to low attacks, this attack is good for stopping hop/jumps attacks that whiffs on crouchers because the vertical hitbox along with Goro crouching.

d. D: 80 damage, whiff/cancelable, hits low. Not a bad sweep even though the range is shorter than his d.B, it's good that you can cancel it into his other special moves (like qcb+B or dp+C) to shorten its recovery. But comparing the potential of his s.B, it would be a better option to not use this sweep if you are trying to punish against moves that have a fair amount of pushback, which the sweep couldn't punish.

j. A: 45 (40) damage, hits overhead. Goro punches down at a 50 degree angle at a short range. Good for jumping in with and comes out fast. It can also crossup some opponents as well.

j. B: 45 (40) damage, hits overhead. A deep knee that hits in-between an almost 30-40 degree angle. A crossup attack of choice Goro which can look a little ambiguous sometimes.

j. C: 72 (70) damage, hits overhead. Goro looks like hes diving off a platform to hit you with both of his elbows. His body's hitbox is almost completely horizontal during this attack, and he hits downward at a 50 degree angle.

j. D: 70 (68) damage, hits overhead. One of Goro's best jumping attacks. It points at a steep angle at almost 30 degrees and can be used as an instant overhead against certain crouching characters. It can form some rather nasty high/low mixups when used in conjunction with is stand B (which hits low).

CD: 75 damage, cancel-able, hits mid. A big palm slap to the opponent's stomach causing a techable knockdown. Goro doesn't move an inch during this move so he can't really gain any kind of range with this specials if you whiff cancel it.

j. CD: 90 (80) damage, hits mid. Goro lays an aerial smackdown which causes a hard knockdown. It hits at an 60 degree angle but can be ducked under by some characters crouching B's, even while used during a hop. On counter hit, it causes the opponent bounce against the wall then fall towards you for a follow-up (hcf+A, hcf+C when they hit the ground, df+C into hcf+A, or HD mode etc.) of your choice.

Jiraishin = (dp+A) - Goro's earthquake. With two hands raised about his head, Goro slams the ground with great force and, if the opponent is blocking high, then he will fall to the ground (he must crouch or jump). The C version is his earthquake feint and the A version is the one that actually hit. His Ex version is faster, can be canceled out of when his hands slap the ground, and is an overhead.

Tenchigaeshi = (hcb,f+P) - Goro's trusty command throw. Goro picks up his opponent and slams him or her to one side, picks them up again and throws them into the air. The Ex version has GREAT range and allows a follow up juggle attack such as far D.

Osotogari = (dp+K) close - Goro's command throw. Has one or two frames of invincibility but basically (much like Clark's dp + K Frankensteiner ) Goro performs a judo trip on his opponents; it'll catch the opponent, if they don't escape. This move is DC'able into qcb+K (into hcf + C), dp + A or super cancellable into his qcbx2+P. Great move to cancel into after his command roll.

Kumotsukaminage = (hcf+A) - Goro's standard anti-air. He reaches into the sky with one hand outstretched. Used well with predicted jumps (due to it's slow startup you have to use it pre-emptively) and in conjunction with Earthquake Feints (dp + C) on wakeups (Opponents tend to jump and so you do hcf + A to snatch them out of the air.)

Kirikabugaeshi = (hcf+C) - Goro reaches and attacks the ground with one hand. Relatively slow attack, however if you sweep your opponent and they do not tech roll, you get a free OTG hit. Combos off of a d.A, df.C chain.

Jigoku Gokurakuotoshi = (hcbx2+P) - Goro's standard command throw DM from past iterations. Picks up the opponent, slams them from side to side violently several times before throwing them into the sky. Ex has increased range so he can combo s.A, d.B, Ex DM.

Kyouten Douchi = (qcfx2+AC) - Goro's counter move DM,. He raises his hands like he's doing Earthquake and, if any physical attack hits Goro during this time, he'll throw them into the and and slam the ground like his Earthquake. If used as a MaxCancel he'll just do the second part and slam the ground.