The King of Fighters XIII/Takuma Sakazaki 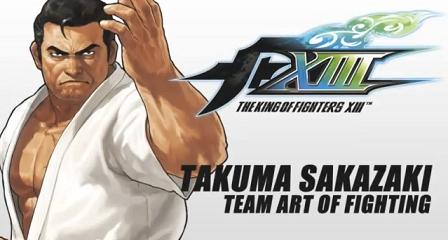 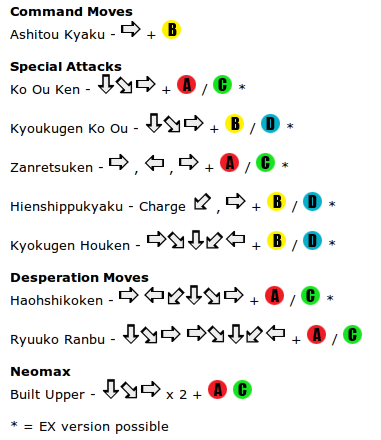 Producer Yamamoto says: He has less stun values than the arcade, but he’s still easier to dizzy the opponent than other characters. Also, it’s not written above but damages on his other specials have also been raised, and he’s a character that can do high damage. He’s been buffed in a lot of places like his air CD and invincible Fierce Ryuuko Ranbu, so please try using him.

Takuma is what you would call a "powerhouse character" that revolves around really strong close range combat with proficient zoning ability. He can keep his opponents at bay with Ko Ou Ken and Haohshikouken and if those don't work the EX versions should get it done. He is a very powerful character that fits the bill for anyone looking for a high tier character for their team.

Kyoukugen Ko Ou his possibly is his best move as it helps him keep the pressure on while he's in the opponents face.

Kyokugen Houken that can prevent the opponent from doing a counter-attack and quickly turn the tables in your favor.

Hieshippukyaku is the preferred move to use after crouch normals to help carry the opponent to the corner.

Zanretsuken and Ryukko Ranbu can be used as combo ender's.

NeoMax, Built Upper, can be used as an anti-air to counter jump-ins because of it's sheer vertical range.

HD combos consist of Takuma getting his opponent into the corner and possibly finishing the combo with his NeoMax.

st. A: 25 damage, cancellable/chainable, hits mid. A quick punch attack, a basic move, can work as an anti-air if timed correctly.

cl. C: 70 damage, cancellable, hits mid. A punch aimed towards the stomach, this will be your combo starter of choice preferably after jump-ins.

cr. A: 30 damage, cancellable/chainable, hits mid. Crouching light punch, quick and simple, can be used to chain lights or to start combos while crouching.

cr. B: 30 damage, cancellable/chainable, hits low. Crouching low kick, one of his better pokes because it's fast, hits low. Definitely the preferred move to use when starting combos from low attacks.

cr. C: 70 damage, cancellable, hits mid. Crouching uppercut, good vertical attack range so it can be used as an AA if timed correctly.

cr. D: 80 damage, cancellable, hits low. Sweep kick, knocks the opponent down if it hits them, whiff cancellable as usual.

Oosotogari = b/f + C/D close - Takuma grabs his opponent then throws him/her over his shoulder. The distance is good enough for Takuma to cross-up on the fallen opponent with a j.D.

Ashitou Kyaku = f+B - Takuma does a thrust kick kicking his opponent in the gut, good hit-stun and good reach. The recovery is pretty decent as well.

Ko Ou Ken = qcf+P - Takuma gathers energy in his hand, then throws it toward his opponent. The start-up is slow, but the projectile is large and fast so it's worth using with the right timing or if you're on the opposite side of the screen trying to safely build meter. The weak version slowly travels across while the strong version goes much faster. Both versions are super cancellable upon activation.

(EX) = qcf+AC - Takuma throws energy from his hand, except it instantly hits the opponent even if they are on the other side of the screen, very fast start-up.

Kyoukugen Ko Ou = qcf+K - Takuma makes a Ko Ou Ken energy sphere in his hand, then hits the opponent in the stomach with it. After making contact, he dashes towards for the strong version (not the weak version). This move is GOOD, possibly the best thing that ever happened to Takuma. When you use it after a "st. strong normal" it makes Takuma move forward, whereas other any other move in the game would generally push the opponent away because of the hit-stun. This move bypasses the hit-stun, making it rather easy to follow-up with another move as long as it's something with a really short start-up. If you use it on an opponent in the air it will juggle them. This move also makes it easy to get opponents in the corner. All versions are drive/super cancellable on hit.

(EX) = qcf+BD - The EX version has "guard point" properties, which means that if you use it against an opponents normals or special moves at the right time it will guard it then bypass it hitting the opponent.

Zanretsuken = f,b,f+P - Takuma does a flurry of rapid punches hitting the opponent 7 times ending with a pose as they fall to the ground. Good range. Relatively fast start-up and, if whiffed, the recovery isn't bad, but try to use it after command normals or just drive cancel into just to be safe. Both versions are drive/super cancellable on the last hit.

Hienshippukyaku = db~f+K - Takuma does a flying thrust kick hitting the opponent in the gut. The weak goes a short distance and does one hit, but it is also Drive/Super Cancellable as soon as his feet touche the ground. The strong version goes a bit farther and does two hits. Knocks the opponent down on the second hit. Preferably used in combos that start from light crouch normals.

(EX) = db~f+BD - Works the same way as the strong version except the second hit launches the opponent into the air for a possible follow-up attack. Faster start-up as well.

Kyokugen Houken = hcb+K - Takuma grabs his opponent and hits them, breaking their fighting stance for a brief moment. This is one of Takuma's newer, more unique moves in his moveset. It's a command grab that can be used to quickly stop the opponent from hitting you and quickly turn the match in your favor. This move does no damage, but enough hit-stun for you to follow-up with an attack. The weak version just breaks their guard, while the strong version does the same, but makes the opponent and Takuma switch sides. Good when you are cornered. The recovery when whiffed is poor so make sure to time it right or drive cancel into it.

(EX) = hcb+BD - Has a faster and more invincible start-up, works rather well as a reversal.

Haohshikouken = f hcf+P - Takuma forms a very large energy sphere using both hands, then throws it at his opponent. Weak version goes at a slow speed, while the strong version travels much faster. This move isn't all that combo friendly because of slow start-up. Can be used to catch some airborne opponents off guard, or opponents that are in a juggled state.

(EX) = f hcf+AC - Shoots three energy spheres instead of one.

Ryukko Ranbu = qcf hcb+P - Takuma quickly dashes forward and, if he makes contact with the opponent, does an 11 hit combo ending with a thrust kick then a Haohshikouken. The start-up is very fast, making it easy and useful to use after command normals and some EX attacks. Max Cancellable on the 11th hit.

Built Upper = qcfx2+AC - Takuma does an uppercut flying up into the air taking the opponent with him, then descends slamming the opponent onto the ground with a devastating karate chop causing a plume of smoke & dust to fly up. This move has poor horizontal range, but it makes up for it in enormous vertical range. The initial start-up (the first hit) doesn't do any damage, but the follow up attack does. A unique thing with this move is that it can be used as an anti-air. If the opponent tries to jump-in, it can be used as a counter-attack/reversal, but strict timing is required. If the start-up attack whiffs, the descending karate chop can hit for 450 damage.