The King of Fighters XIII/Vice 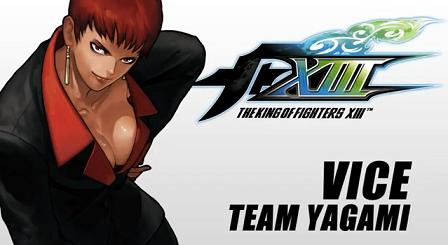 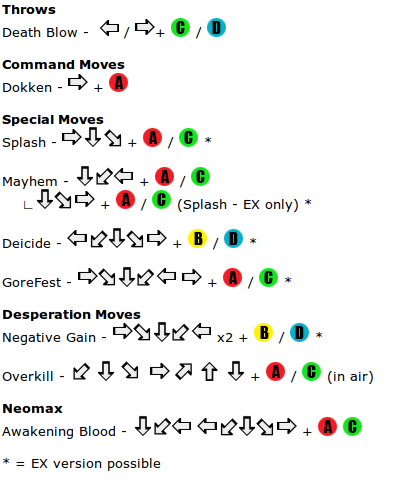 Wait a moment, why is Vice here? Isn't she supposed to be dead along with Mature? Well apparently, ever since KOF '97, the two of them have been haunting Iori's dreams. That being said, in KOF XII, Vice and Mature eventually revealed themselves to still exist in the mortal realm for some reason. What matters is that despite being killed by him, they have no grudge against Iori and decide to be his teammates. But, I don't know. They don't seem trustworthy enough

Vice is a grappler that has a variety of good normals to use at midrange, and focuses on confirming hits into EX Deicide for hard hitting combos. Deicide is a long reaching hit-grab that pulls the opponent back to her, and EX Deicide has anywhere juggle properties which makes it an important element of her kit. She has a wide variety of anti-air and air-to-air normals, so the basic concept to work on is to pressure them on the ground until they want to jump, then hit them out of the air for a heavy hitting anywhere-juggle combo. Additionally, Vice has an excellent close range mixup game. After a connected Gorefest(her command grab), she has enough time to safe-jump or ambiguous roll on their wakeup. Thus it can be frugal to end combos in Gorefest to maintain an advantageous position.

Because of her meter-centric playstyle, she is often used second or anchor. Without meter, both her damage and tools at neutral are greatly hindered. To make up for her strong mid/close range game, Vice has few good options against projectiles, and even with meter, she has only has a couple of useful defensive options. So it's important with Vice to start pressure early and maintain momentum to be played effectively.

cl. C: 70 damage, cancellable, hits mid. An elbow to the stomach, rather mediocre range but can still be used to initiate combos. cl. D is typically preferred in most cases that you'd need a close attack.

cr. A: 25 damage, cancellable, hits mid. Has the same horizontal range as her standing jab. Overall not especially useful because it has the same frame advantage as cr. B, and is only one frame faster.

cr. B: 30 damage, chain/cancellable, hits low. A quick crouching kick which is a good range poke and is great for chaining lights into combos.

cr. C: 70 damage, whiff cancellable, hits mid. Looks the same as her close C except executed while crouching. Decent AA angle, but shouldn't be favored over st.a or st.d.

j. A: 45 (40) damage, hits overhead. A quick punch attack and a relatively basic air poke. Useful for air to ground attacks, and can setup tick throws due to it's short blockstun.

j. C: 72 (70) damage, hits overhead. A downward angled air punch. Your best air to ground attack, but not useful as an air to air.

CD: 75 damage, whiff cancellable, hits mid. Vice moves her leg forward then she does a hard punch attack with excellent reach. Relatively slow but a good move to move forward or cancel into deicide or splash on whiff. Combos in EX Deicide on hit, or the D version of Deicide on counterhit. Cancelling into splash on block will cause it to whiff due to the long blockstun of the move.

j. CD: 90 (80) damage, hits mid. Heavy punch attack reaches far out horizontally. Deals a large amount of hit and blockstun. A common way to confirm into her anywhere juggle combos. Great for air-to-air and in some cases starting grounded pressure but can easily be crouched and punished.

Death Blow = b/f + C/D close - 100 damage, causes soft knockdown. Vice grabs the opponent then slashes them across the face. You can link into an EX Decide against Chin and Athena before they hit the ground.

Dokken = f+A (raw) - Vice moves forward a bit and makes a fist then hits the opponent from above.

- Super cancels on block or hit

Dokken = f+A (canceled into) - Vice moves forward a bit and makes a fist then hits the opponent from above.

- Super/Special cancels on block or hit

Deicide = hcf+K - Vice swipes her arm forward. If it connects with the opponent, she retracts her arm to normal length pulling the opponent into close range for a possible follow-up combo. Virtually safe on block due to the knockback, but some supers may be able to connect during the recovery. Be careful when using this move, because trading with any move will result in zero damage.

Gore Fest = hcb~f+P - Vice grabs her opponent then rushes forward dragging them across the ground then throws them into the air.

(EX) = hcb~f+AC - The range when she grabs is extended to about a character length.

Splash = dp+P - Vice leaps forward and grabs any grounded opponent and slams them to the ground. While it can be a useful mixup tool, both versions are a tad slow and can be stuffed before it connects. Combined with low damage (unless super canceled), it is somewhat of an unrewarding move to attempt. Use sparingly.

(EX) = dp+AC - Much faster start-up and a lower jump arc than A version, while travelling much further.

- Can be super canceled into Overkill

Mayhem = qcb+P - Vice does a charging shoulder tackle that knocks the opponent in the air. Both versions are unsafe on block, so they are not particularly good outside of combos, unless you know a blocked hit will finish your opponent off with chip damage.

(EX) qcb+AC = - Has invincibility frames till startup, but is slower than the A version (14 frames vs 8). Still extremely unsafe on block though. The invincibility and distance traveled makes this an effective but risky move to use.

Splash = qcf+P (after Mayhem) - Follow-up to Mayhem that looks similar to the raw version of splash. Compared to hcb~f+p as a combo ender, splash opens up less oki options, but provides better damage, especially if super canceled.

- Can be super canceled into Overkill

Negative Gain = hcbx2+K - Command grab where Vice somersaults backwards and grabs her opponent by the neck with her legs then proceed to do three back-flips slamming the opponent each time she lands on the ground.

(EX) hcbx2+BD - Command grab with much longer range at start-up, does five slams instead of three, and a huge red skull comes out on the last slam.

Overkill = db~tk~u~d+P in air - Vice laughs maniacally slamming the opponent to the ground, then falls on them making a huge red skull come out of the ground from under the opponent. It buffers with the tk input (qcf, uf) while you're still on the ground, so the input remains the same.

- Max Cancels immediately after the hit

Awakening Blood = qcb~hcf+AC - Vice undresses her top revealing an Orochi birthmark on her right shoulder, she then suddenly disappears while laughing causing a giant snake-like eye to appear then a bloody snake coil flies across the screen quickly running the opponent over.