SNK has announced that King of Fighters XIV will get its PC release on Steam, June 15th, 2017. It will come in two different editions: one roughly the same as the original release including Kyo and Geese costumes and also a Deluxe edition with all costumes, all DLC characters, a digital artbook and soundtrack.

Update: both versions currently have a 20% off pre-order bonus and provide access to a Beta pre-launch.

Be sure to watch the trailer for the pre-orders as it is hilariously produced by the SNK Shopping Channel:

In the run up to King of Fightrers XIV being updated to 2.0 and having the four DLC characters added today April 5th, SNK has released official patch notes for all subsystems and character balance adjustments. You can find the full changelog here. There will be a lot to explore once 2.0 drops so get a head start so you can best explore what has changed for your characters.

We are letting you in on the details of our largest update yet (Ver. 2.00), to be released on April 5th (PST)! #KOFhttps://t.co/jx2nCx0Vc4 pic.twitter.com/iNlnF7LBnh

The 4th and final DLC character has been announced for King of Fighters XIV, it is Geese’s son Rock Howard! He debuted in Garou: Mark of the Wolves back in 1999 and is finally set to cross over into the King of Fighters series proper. Producer Yasuyuki Oda has said many times that he’d like to revisit Garou as a series, perhaps this is his first step toward that. Check out the trailer:

Now that all the DLC characters are announced who are you looking forward to the most? Who will be the nightmare to fight against?

The interesting times keep rolling as SNK announced today a partnership with China based anime and CGI companies to bring out a new King of Fighters animated series called: King of Fighters: Destiny. Details are slim at the moment, but you can vist the show’s official website and see the primary characters involved here. So far all that is known is that it will be releasing sometime later in 2017 in China and does state both Chinese and Japanese voice talent are involved, suggesting that it won’t be limited to a strictly Chinese release.

The new CG Animation Series "THE KING OF FIGHTERS: DESTINY" has been announced! #KOFhttps://t.co/g0f0MfasVq pic.twitter.com/ZaVGbBJiCi

Taito has announced the next loketest for KOF XIV will be held Saturday March 25th – Sunday the 26th at four different locations around Japan. Players attending the test and answering a NESiCA questionnaire can acquire a arcade version sticker as well as a unique title within the game itself. Any KOF players in Japan attending the event should stop by our Discord to let us know how it felt.

I was asked to write down my thoughts about heading to the recent edition of the Chicago area winter tournament stalwart: Frosty Faustings.

Traveling from DC headquarters up in the Twin Cities, MN to Chicago twice annually (for both Frosty’s and Combo Breaker) is a time honored tradition now for the members of the KoF scene in Minnesota. We drove down Thursday morning so we’d have lots of time to settle in and find other players to get games in with.

For its entire existence Frosty’s has been one of the premiere national tournaments for anime players, especially Guilty Gear, but it has also for many years attracted Midwest KoF scenes (MN, Chicago, Indiana, Ohio etc) to meet up and duke it out. Over the last three years, tracking with the overall expansion seen in other FGC events, Frosty’s has gone from being run in medium sized bars to full blown majors-sized venues. Last year there were definitely struggles seen in venue size being too small, split areas of where brackets were run, as well as some very late running brackets. We chatted about these issues on the way down and hoped the move to an even larger venue would improve the tournament experience.

The venue opened up on Friday and we made our way down from the also crowded overflow hotel just down the street. Already a testament to the increased popularity of the Frosty’s event was that the venue hotel had sold out Saturday night sometime just after Thanksgiving. We were not accustomed to having to be worrying about getting a room at this normally modest sized regional event, so we late to booking a room. Getting to the venue the scope of why this happened was clear.

Four years ago Frosty’s was being held in a moderate sized bar/gaming space called Game Pazzo in a strip mall. We walked into a venue that was at least as big as the old UFGT/first Combo Breaker venue, which is to say a large sized major tournament. It was quite impressive that they’ve managed to evolve this far! Across the board there was a electrifying atmosphere all weekend as news of Xrd Rev2, the first major US tournaments for both SFV season 2 and BlazBlue CF happening here and a bevy of top players in each game traveling to the event, brought a truly majors-tournament level of excitement.

Having traveled to CEOtaku in October this was the second major I have attended for KoF XIV. Friday I spent all my time in the venue getting games in with players from Atlanta, Michigan, San Francisco and lots of other places. Outside of the first UFGT during the KoF XIII era, I have never attended a tourney that matched this one is the amounts of different KoF scenes that have been able to make it to a single event. It was very heartening and fun to get so many matches in with so many different people. We tried to go to sleep early, but struggled to leave such a lively venue. 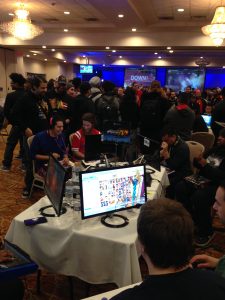 Saturday for tournament day the heavy hitters showed up. Top players El Rosa, Violent Kain, Kusanagi, Goichi, KCO_Pedro and KaneBlueRiver all traveled to the event, as well as local area gods James Jr., Mario E and Mooney Blues. It was a stacked tournament and I was sad to miss quite a few great matches in pools that could easily have been a grand finals at a lesser tournament. All told more than 70 people registered for the KoF XIV tournament.

Top 8 was the most exciting I’ve see live so far for a XIV tournament. With the absolute thriller being Mooney Blues v Goichi from Japan which I won’t spoil for you. As a game XIV seems to be developing a fun to watch ‘high stakes’ sort of meta with people fishing at mid to long range into Max Mode or baiting movement at close range. Violent Kain was especially good at punishing people for ill timed movement options.

(Top 8 as streamed by RSBlackrose )

After the tournament was complete everyone stuck around the stations to get in more casuals even though most were exhausted at that point. Violent Kain and El Rosa recorded a FT10. KCO_Pedro got lots of games in with anyone willing. But, one of my favorite moments of the event was late on Saturday night as a dozen or so of us just stood back and looked at the character select screen explaining our thoughts on various characters and where XIV might go in the future.

As me and the other Minnesota players were leaving the venue to pass out in our hotel room we ran into Kane Blue River who showed us the amazing prize each person in top 8 got:

My bounty for getting top 8 this weekend in KOFXIV at @FrostyFaustings !

He also gave us great advice in that whenever we can do this (meaning travel to tournaments) we should. Kane said there were a couple players back in Chile that we easily as good as him, but simply couldn’t travel. Solid advice and motivation to try to get to as many events outside your scene as possible. We drove home Sunday with hours of discussions about where XIV is headed as a game, which characters need more exploration and of course what we can do as a scene to improve our play.

To end this I really need to say what an amazing job the TO’s of Frosty Faustings did this year. They have evolved so far in the nine years and this tournament ran as smooth as any I’ve ever been to. If anything they may have already outgrown the size of their event again by next year. Hope to see everyone again at Combo Breaker in May.

SNK has announced a new program of support to for tournament organizers hosting KOF XIV events. They are offering assistance in advertising, prize money and prizes. The program extends into August of 2017, but events hosted before January 29th have the opportunity to offer a qualifying spot to the KOF World Championship happening at the end of this coming January. If you happen to know TO’s that are planning to host KOF XIV be sure to forward them this information.

How to find frames on block

Dream Cancel’s own desmond_kof has uploaded two great tutorials to help you navigate testing characters moves in the 1.03 patch of KOF XIV. Hopefully these will help you determine what is safe or punishable for different characters.

How to find frames on block

How to find start up frames

SNK has announced today that the latest patch for King of Fighters XIV will release tonight at 6pm PST. No word yet has to what the patch encompases, but they have confirmed that at some point full patch notes will be released, but assuredly this will involve the re-balancing of the cast they have already mentioned.

Let us known what you find once the patch drops over in the DC forums.

At the Tokyo Game Show KOF XIV producers Yasuyuki Oda and Neo-G have said that XIV will be getting a patch update sometime in October. The patch will include character balance as well as some more tweaks to the online components of the game such as harsher penalties for ragequitting.

Check out a more fleshed out article over at the Mad Man’s Cafe with a translation as well as a link to the entire presentation to those who speak Japanese.

Be sure to hit the forums and DC Discord channel to let us know what you’d like to see in this upcoming patch.