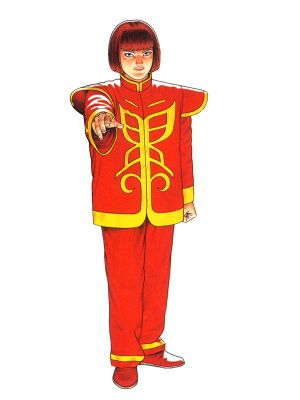 Tiny shoto child #2, and one of Real Bout 2's infamous top tiers. He's impossible to keep out and impossible to block. He has a projectile S-Power that can be used in the air and heals him, the ability to vortex off of any knockdown, plus frames for days, and a bunch of teleports for some reason. His scant weaknesses are mostly that he's stuck with lame small normals and a poor midrange game. This is further exacerbated by his ground movement not being quite quick enough to let him force his way in at that awkward spacing. But that's a very minor set of weaknesses when one touch can guarantee his offense and likely win him the round.

All grounded A/B normals uniquely have 2f less hitstop and blockstop than equivalent attacks from other characters. This renders his A/B normals and subsequent chains harder to Breakshot, but also harder to hitconfirm.

Fireball juggles for a reset far away, 66A inflicts a low-damage knockdown far away, 623C keeps them close and does the most damage. Poor spacing can and will make the wrong followup miss completely.

You'll be doing this one a lot. Against some characters and at some spacings you can just go straight into 623C, but the dash is always safer to put in there to ensure it hits.

Basic P-Power combo. Does a lot more damage than a basic jab combo probably should. The super won't connect properly if you're too close to the corner or don't delay the cancel when launching them.

Like with the other P-Power combo, you want to not be too close to the corner and delay the P-Power so it fully connects.