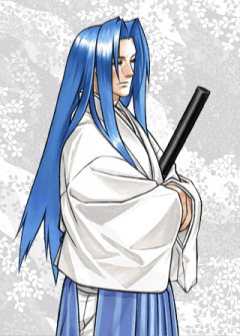 The iaido character finally has Mist Finers. Nice to see them in something with neutral for a change.

Ukyo's moveset has been condensed a bit in that apple slices are now his main combo enders in addition to being solid chipping tools, but to make up for the removal of shadow slashes he has gained a few new moves. In addition to the aforementioned Mist Finers, Ukyo now has counters which he can throw into his recoil cancel game, and furthermore his WFT has been buffed considerably. He still has amazing pokes (especially now that 5C recoils on block), his ground movement is still tops and he can still shmix well with the one-and-only Tsubame Gaeshi, so the gist of Ukyo remains the same.

5A, 5B and 5C are all great pokes. All have spectacular range and speed for their respective strengths and all can be recoil cancelled. For recoil cancel options Ukyo has a few more tools for the job this time around. If spaced correctly he can used his newfound Mist Finers (236S) as quick, effective counter-pokes, but these are unsafe. In addition to the standard deflect Ukyo also has his new counters (64123A/B), which may additionally serve as high/low mixup tools but are quite gimmicky. As for anti-airs Ukyo can rely on 2B and his high Mist Finer at range, but up close can bet on his heavy Tsubame Gaeshi (j1236C) as a highly-damaging air-to-air. Additionally he can cancel his backdash into it as one means of stopping an opponent running at him.

However, Ukyo is not a character who pokes all day. Doing so would just leave him open to deflects, and unlike Charlotte he doesn't have a safe special he can mix in with his pokes. Instead, Ukyo uses his impeccable ground speed to play a highly-effective hit-and-run game. Coupled with his fast run and amazing range, Ukyo is capable of punishing literally anything with 66C, which leads into a knockdown. If you're unarmed then 66D will suffice. Another aspect of Ukyo which makes him special is that he can punish many things at close range that other characters can't. His light Tsubame Gaeshi (j1236A), when tiger knee'd, serves as an extremely fast punish against even blocked close mediums, as it will hit before they can be recoil cancelled. This not only deals a very agreeable amount of damage but also leads to a soft knockdown.

Unlike most other hit-and-run characters, Ukyo is able to stick close to an opponent after a knockdown by locking them into a highly-rewarding vortex. This loop is even harder to stop than before, as opponents can no longer delay their wakeup or roll forward or backward to escape it. Instead, their only options to escape it are short rolling, which is prone to meaties, and long rolling which does no favours for an opponent trying to get in on Ukyo if he has a lifelead. The glue for this vortex is Tsubame Gaeshi (j1236S), which in addition to everything listed above is also an instant overhead if tiger knee'd or backdash cancelled. This goes well with his various lows. These include his 2D, which can link into Tsubame naturally while also serving as a low-to-high string which can be tweaked with additional 2D presses, and his 66D, a running slide. His running mixup is already boosted by 66B, which is a grounded crossup, but in this game runstops can be cancelled into jumps, making a running Tsubame Gaeshi much more feasible. One must be careful not to abuse the instant overhead liberally, as all versions leave Ukyo incredibly vulnerable and his low defense value doesn't help much either. If Ukyo is sitting on a lifelead it may be wiser to just run away and keep the opponent at bay with his pokes from there, as Ukyo is certainly good at switching modes on the fly. However, he can instead gamble the clutch and continue to mixup until the end if the situation calls for it. You do have an instant overhead on your hands, after all.

But despite its many uses, Ukyo can't get carried by Tsubame Gaeshi alone. Sometimes he needs help from Spirits, of which Tsubame Gaeshi sadly cannot be used as such.

V Spirit emphasizes Ukyo's hit-and-run gameplay. Rolls give Ukyo additional mobility, and he can make great use of his Rage retention with many opportunities to meditate. While he lacks a good launcher and can't juggle after j1236C anymore, he still has far-reaching pokes which convert easily into Issen during State Of Nothingness. V also has Rage Explosion to burst in a pinch, but you'd much rather use State of Nothingness unless Rage Explosion is your only way to avoid death. V can't Issen during Rage Explosion and the potential reward from State of Nothingness is much higher.

IV Spirit offers a more rounded approach and strengthens his punishes. No need to meditate means Ukyo can focus on his strong vortex after knockdowns. He also gets more frequent access to his WFT, which is faster in this game and combos from many hits, and IV gives Ukyo his full 16 second Rage duration without penalty. Continuous Slash gives Ukyo very damaging punishes into knockdown both standing and dashing, including confirms into WFT. Continuous Slash 4 also gives him an alternative means to build Rage at the expense of some damage, netting about 30% Rage from the full combo. In addition to serving as a last ditch burst, IV's Rage Explosion temporarily unlocks access to both Issen and WFT.

II Spirit maintains the mobility of V Spirit and Rage duration almost as long as IV Spirit, but trades in their other mechanics for a once per match Secret Move that can be used at any time. III can be thought of as a more offensive V where you charge Rage, but Ukyo takes a long time to build to full Rage and III resets your Rage at the start of each round. His Hyper Slash isn't very good so I isn't a great fit. Standard meter gain normalizes his access to WFT and potential repeat use of his Secret Move is appealing, but Ukyo doesn't get as much out of VI's other mechanics.