The King of Fighters '98 UMFE/Eiji Kisaragi 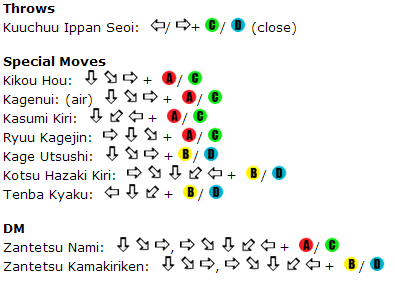 Eiji is a very fast poking-focused character. Eiji's neutral control is really strong due to his fast movement speed and access to teleports that lets him quickly change his positioning on the screen. Alongside this, he has access to plenty of excellent pokes at both mid- and long-range, a few of which have disjointed projectile hitboxes. He also has an aerial projectile he can throw to stall his air momentum. Up close, Eiji's options are fairly limited. He can blockstring well and poke, but he lacks any kind of real mixup tools; using his teleports to do left-right mixups and going for throws are his best options. He also lacks any kind of real invincible reversal, so his defensive game is a bit lacking.

cr.B, cr.A, qcb+P
Tends to whiff unless your jump is perfect, so omit the cr.B when doing after a jump.

King of Fighters 98 UM FE: Eiji Guide by Mash It Out