The King of Fighters XIV/Zarina 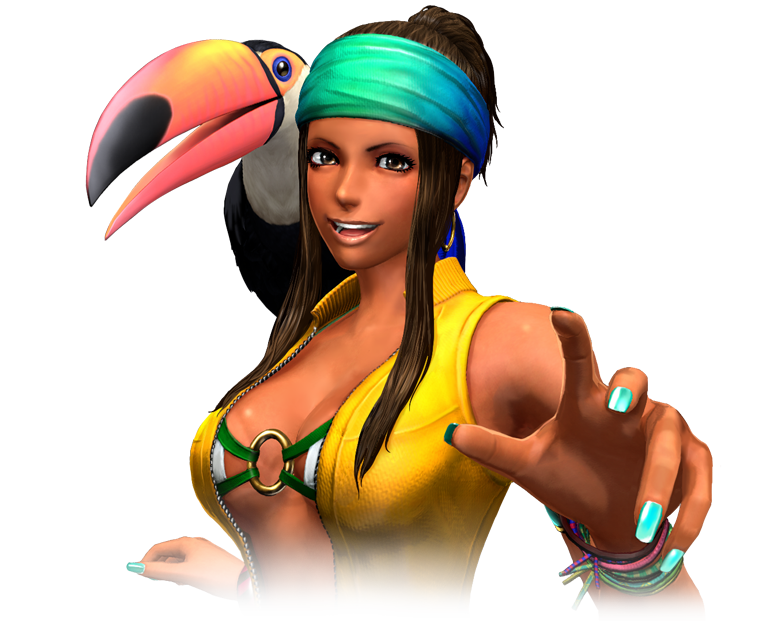 Like Elena in Street Fighter, Zarina makes use of her long-ranged kick normals and high, floaty jump to control space. Though she lacks a ground overhead, she can pressure very safely with her cr.B, cr.A, and safe f+B command normal, as well as her great jump normals like her jump C and jump D. She has a decent DP and an anti-air cr.C that launches, allowing her to deal respectable damage with consistent anti-air. Her lack of a crossup jump normal, however, means that Zarina will have to jump at her opponent more thoughtfully (spacing-minded) than other characters. Her most distinctive trait by far is her surprisingly high damage output -- from all kinds of starters, at all levels of bar, Zarina can output startling damage anywhere on screen.

Zarina's high damage output at all resource levels suggests she could function anywhere in a team order. Her execution requirements are only moderate, but she is recommended more for advanced players than for beginners since she relies more heavily on smart, subtle neutral decisions than other characters.

EX: Faster start up and causes a wall bounce. Can be combed into unlike the regular versions

EX: Causes a wall bounce on hit. Useful in most of her combos.

EX: Starts up about the same as the B Version and wall splats. Great for combos.

Max: More damaging and faster start up, making it a great anti-air, reversal and combo tool. Can whiff in the corner depending on Zarina’s spacing

Max: More damaging and has a bit of invincibility during startup. Still hard to combo during juggles

(Must be half screen or closer, causes a hard knockdown)

(Must be half screen or closer)

(for small characters, use qcb+B)

(use this when someone tries to jump over you)

(Super cancel on the 4th hit of qcb+D)

(use on small characters)

(make sure you run far enough for the cr. C to hit if you perform this with Zarina’s back cornered. Mid-screen and in the corner is much easier and does not require a dash.)

(if you start this combo mid-screen, the dp+D wont reach after the dp+AC throw. Substitute with hcb+C. If you perform this combo deep in the corner, you will need to reverse your inputs for the dp+AC.Also, input the dp+AC immediately after the cr.C hits.

(make sure to dash quick and far enough for the cr. C to connect)

(Delay the super until the foe nearly touches the ground or else it won't fully combo. Add a jump attack for more damage. Switch cl.D with low hit confirm of cr. B, cr. A before df+C but for less damage.)

(You have to delay the super or else it will whiff)