The King of Fighters XV/Ángel 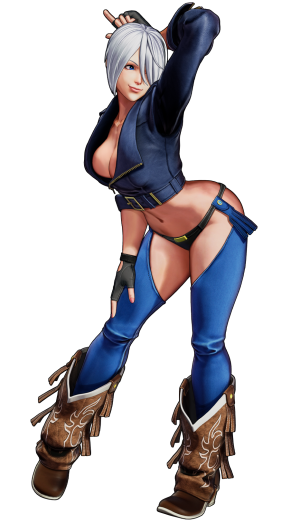 One of the cybernetically modified humans created by the secret syndicate known as NESTS. Her fighting style is something she calls "Perfunctory♥", which is an unorthodox fighting style that makes use of an 'unchain' system that involves multiple throw techniques.
All this means she has unparalleled strength when up close. She loves to joke around, and her personality isn’t something one can pin down. Leaving her life in Mexico behind, she joins Krohnen and enters KOF.
Jump: 40f
Hop: 32f
Backdash: 22f
Run Speed Ranking: 5
Replays

Ángel is a very, very strange and complex character in comparison to the rest of the cast, in part due to some unorthodox normals and mostly due to her Unchain system. Ángel's Unchain system allows her to cancel a set of special moves into another set of special moves into another set of special moves to confuse and mix up the opponent. She has multiple different lows, overheads, and command grabs and ways to set them up. However, actually pulling off these commands is a different story. Ángel's inputs aren't necessarily hard, rather they're very unusual, akin to Mortal Kombat or Tekken inputs. She is a different beast compared to everyone else in the game, but can be very rewarding for those who put in the time and effort to master her. Outside of her complexity, Angel is a powerful brawler who excels at close range. Her Unchain System allows her lots of variety in her approach, punish, and pressure games, and getting put in the corner against her is a death sentence. Angel's biggest weakness outside of her complexity is her neutral- as a brawler, Angel will have to force her way in against her opponents. Her pokes are terrible and her approach is very committal, making it easy to push her back. If they can successfully keep her out then it can be hard to run her game properly. Angel functions best on point, where her high damage potential and good meter build allow her to vortex the enemy team to death.

Circle • Under Blow - after Unchain Start,

Overview Unchain can be thought of as a complex rekka series.