The King of Fighters XV/Antonov 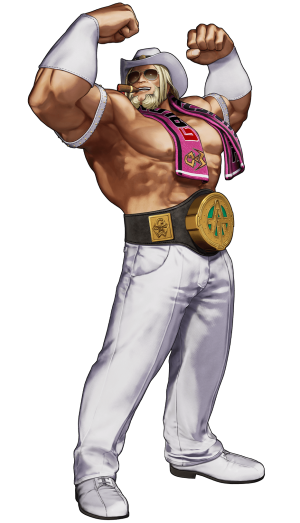 Skipping town after facing multiple expensive lawsuits, this Russian, ex-millionaire, and self-proclaimed "first champion of KOF" gets a new lease on life after starting up a professional wrestling team.
He uses his massive fists to beat down his opponents and joins Ramón and King of Dinosaurs with the ultimate goal to reclaim his rightful title as the first champion of KOF.

The former (self-proclaimed) King of Fighters and the previous host of the KoF tournament, Antonov is a big body bruiser who is, almost literally, built different. Antonov is all about using his massive body to put the fear of God into the opponent, whether it be through using his long range, command-cancellable st.B and his Whale Stream (214P) to create oppressive frametraps, mixing up with his Gigantic Back Press (624D) command grab, or just being a general threat with his standing heavy normals that launch the opponent. Antonov has even more reason to be feared once he has his hands on a bar or two of meter, because that's where he really gets his party started with his extremely damaging metered combos and hard knockdowns. Antonov can and will obliterate anyone once he finds an opening... even if he has a very, very hard time finding one. Although he may be big, and his damage output even bigger, Antonov has little to no light conversions, no sweep, and a rather sluggish moveset, so if the opponent gets the jump on Antonov, it's all over for him, especially since having a huge frame makes him an easy target. If you don't care about a very poor light combo game and just want to absolute whale on the opponent and laugh when they lose 50% or higher from you making the smallest of reads, then Antonov may very well be the character for you.