The King of Fighters XV/Blue Mary 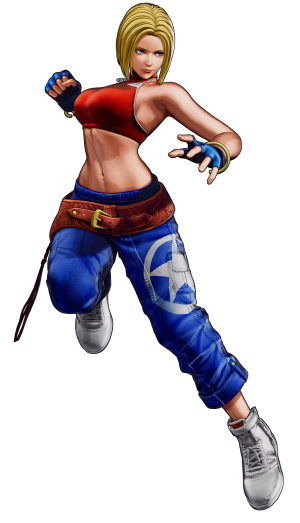 She currently works as a freelance special agent. Born from a long line of famous fighters, Blue Mary excels in all fighting styles, and more particularly, in Sambo Commando, a martial art that uses striking and grappling techniques.
Blue Mary has a strong bond with Terry Bogard.

Mary reclaims her seat as a KOF regular with more or less the same tools which made her strong in XIV at her arsenal. Fitting for a detective, Mary is able to give chase with tools such as her air normals and low profile slide, making her a threat from hyper hop distance. Her various specials have plenty of active frames to catch the opponent, while her reversal and dodge grab give her respectable options on defense. Once she's in she has access to effective mixups, with a decent high/low game backed up by a leaping grab and strong air normals to keep pressure going, and everything she does can lead to a hard knockdown. Mary's main weakness is that, while her moves are all quite active, the recovery on them is abysmal, making her very easy to punish at the worst of times. This is especially true for her defensive options, which though varied will leave Mary vulnerable if she makes the wrong call. If you want to be a good detective then do your homework before barging in.

Mary, at least at round start, is most feared for her ability to charge in with Straight Slicer ([4]6K), a low profile slide, and her jumps which travel low and far. Abusing these tools, however, is a surefire way to get you killed. [4]6D doesn't reach entirely fullscreen, meaning the opponent always has the opportunity to backdash and punish at this distance. This route is further closed against opponents with ground-skimming fireballs, and while [4]6K can be used to go under high fireballs the hop Mary does before sliding means this needs to be pre-emptive or else she will get hit during the startup. Mary's j.D and j.CD are both notable jump-ins but either of them will cleanly miss an opponent above her; as such, Mary is also reliant on her air-to-air in j.C for getting in. Of course, these are susceptible to getting anti-aired, although j.CD often requires a reversal or meter to beat. Mary doesn't have any fast, long-reaching heavy attacks to poke with on the ground; although f.C reaches far and is super cancellable and f.D goes over lows, these are both sluggish on startup and recovery. Mary's best normals for pressure are f.B and 2B, both of which are fast and reach quite far. f.B is safe to tack on at the end of pressure as it covers opponents attempting to jump out while letting you recover in time to check a roll, but it isn't cancellable into anything besides Maxmode.

Mary's hop pressure is standard fare. Her 2B and 2A are quite good for lights, sporting decent range and advantage, and she can combo into the light and EX versions of Straight Slicer from a simple low chain. j.D, in addition to being a great jump-in overall, also has some crossup potential, though quite limited. If the opponent attempts to mash out then Mary can also throw in an early hop j.B, which reaches quite low, to stuff their attacks, with this normal also being able to crossup. If the opponent is respectful on defense then Mary can continue pressure with Spin Fall (236P), which crushes lows, or threaten with M. Breaker (623P), a leaping grab indistinguishable from a regular hop. Notably, the startup of 623K is indistinguishable from that of a hop, making it a legitimate mixup option. When Mary has meter she also gains access to command grabs such as M. Typhoon (6321463214K) which have plenty of range for catching rolls. Mary is unique in that she has a meterless command grab which is locked behind a special dodge (214P~236P). While the EX version allows her to grab instantly, the regular version forces you to wait twelve frames before she is allowed to grab, limiting how you can use it on offense.

Mary has perhaps the most defensive options out of any character, but they are all quite risky. Vertical Arrow (623K) is an extremely active reversal which leads into a hard knockdown on hit, but it's sluggish to start and as punishable as you would expect. The EX version starts up way quicker, saving Mary from certain safejump setups, but it doesn't lead to a hard knockdown. Another important option is her dodge, as discussed earlier, which is great for punishing rush moves and opponents who are way too close to you on your wakeup. However, not only does the followup, a grab, not work against aerial opponents but the dodge itself can be thrown. If your opponent expects you to use it as a mixup option then there's nothing stopping them from throwing you, as Mary has to be quite close for the grab to reach. Climbing Arrow (df+D) can low profile moves such as Terry's Burn Knuckle and can juggle into Vertical Arrow, but its slow startup and weird angle makes it ineffective as an anti-air. Mary may force a defensive mixup between whether she will go for Vertical Arrow (strike) or Real Counter (throw) as her reversal of choice, but this is shut down by simply staying out of range from either of them. Keep in mind that Mary is not restricted to these special defensive options - in addition to rolls, Mary's jabs and cl.C are quite good at pushing her way out of pressure, particularly cl.C which, in addition to being a two-hit combo starter, is fast and reaches high. f.B, in addition to being an important tool in pressure, may also be used for its speed and range. Though both of Mary's supers (her ranbu and her command grab) can be used as reversals, it is best to save your meter for guard cancels or Shatter Strike if you are using it defensively.

Mary is quite flexible with meter. Her meterdump combos are notably effective for their cost, both packing high damage and strong corner carry. Given her offense and usage of specials she is often quite good at building meter too, but this depends on the matchup. While she is efficient with meter, she is quite scary as an anchor, not only because EX Straight Slicer is a threat in neutral but she can very easily convert into her Quickmode Climax combo from her overhead and her lows. Mary can go anywhere on the team, but polarising matchups and her high risk factor are serious concerns.