The King of Fighters XV/Ramón 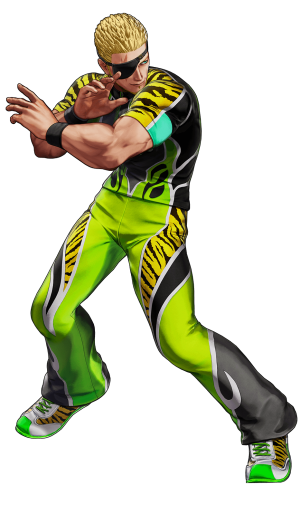 Ramón is an influential luchador (Mexican pro-wrestler) who has been called the "strongest human alive". Though he always wears a bright smile, Ramón isn't afraid to tell people how it is.
Although small for a fighter, he toys with his opponents by utilizing his agility and skillful throws. He joins G.A.W. where he fights alongside Antonov.

(Hold OK) = Can be held before releasing.

(Near Wall) (Midair Only)

The core of Ramón's pressure lies in his Feint Step (214P), which sees him stepping back and forth until the button is released. The light version unleashes a dropkick once released, which is great as a combo ender because of the hard knockdown and absurd amount of frame advantage it gives you but is a very ballsy way to end your strings given it is punishable on block. The heavy version, however, does nothing. By cancelling into it after it connects and releasing the button ASAP, Ramón gets a bit of frame advantage to play with. Think of it as a free Roman Cancel, but much more limited in comparison. Ramón can cancel his suite of close and crouching normals into this move, some of them even on whiff to reduce their recovery and to strengthen their utility in footsies. cl.C is fast and 2C reaches far, and if either of them hit they lead to extremely high damage and great okizeme if Ramón has two bars to spend on his EX Volando (2141236K). 2D reaches the farthest of Ramón's normals, but given it's a sweep it only leads to a soft knockdown on hit. Ramón has no need to feint cancel his lights in pressure, as his B buttons are fast and his A buttons leave him slightly plus. However, it can still be useful for safe positioning.

The high reward Ramón gets from his strikes is backed up by his command grabs as mixup tools and Feint Step's ability to set both of them up nicely. For a strike/throw game, Ramón can either run in with something fast to reset his pressure or he can use Somersault (41236K), his running grab, to open them up from blockstring recovery range while also catching any attempts to roll out. This can be layered a bit, as Ramón can also run in and grapple with Tiger Neck Chancery (41236P), which grants better okizeme than 41236K as it grants him a safejump into a crossup depending on whether you super jump or not. He can also cancel 41236K to bait a jump or a poke. Ramón is also notorious for his crossup ability - a decent string (e.g. 2C 3D 214C) will leave him at perfect range to either crossup with j.C, go for a hop or continue pressure with j.CD. Ramón has a weak high/low game, as his fastest lows (cl.B and 2B, both 4f) are short and don't lead to much on hit, but they can potentially be mixed with Ramón's command overhead (6A), which is safe, or heavy Rolling Sobat (623K) which is more rewarding but easy to stuff with a jab.

Against Ramón's pressure, the opponent will mainly be looking for a chance to mash, jump or reversal out. Ramón is only +3 after Feint Step, which is not condusive to airtight pressure; his fastest button at that range is far B, which is 6f and can thus be beaten by 3f jabs, while the strike you're aiming to land (2C) has a whopping 11f startup. To beat mashing, simply delay 2C so their move whiffs, 2C hits their recovery and you get a combo. Against jumps, hopping in with j.A, j.C or j.CD can be used to stop these attempts while maintaining momentum. You may also use st.A or st.D to catch them jumping out while remaining grounded. Against reversals, Ramón can simply block or backdash, but during Feint Step he can also hold the button to run backward - however, it counts as a counter hit if Ramón gets touched so make sure you're spaced properly if you try it. Feint Step is a versatile pressure tool, so be flexible with how you use it and how you respond to opponents trying to counter it.

Ramón's pressure is complex and highly rewarding, but it is in neutral where he must pay a dear price. To compensate for the range of his 2C and 2D and for their use in extending feint-cancelled blockstrings, they are sluggish and have poor priority. This is a common trend across Ramón's set of normals, meaning he often can't afford to mash out of pressure. Ramón's only true reversals are his 41236A, which has five frames of full invincibility, and Tiger Spin (6321463214P) which is invincible and instant. However, these are grabs, making them useless against airborne opponents. In earlier games the opponent could freely attack Ramón with meaty jump-ins due to this weakness, but in XV he now has access to Shatter Strike to properly deal with jump-ins, provided they aren't safejumps (conversely, Ramón's command grabs and crossups are perfect for dealing with the opponent's own Shatter Strikes). Outside of 2C range, Ramón's best tool is undoubtedly his j.CD, which is similar to Hein's j.CD from XIV in terms of speed, range and priority and which can segue into his pressure if it hits. However, given Ramón's high, slow jumps it's nowhere near as good. st.C, though it doesn't lead to much without Maxmode, is fast and has good priority, so it can sometimes be used as a poke or to end blockstrings safely. Finally, Ramón's new st.CD (his st.C from XI in appearance) gives him another far-reaching anti-air if he has the space for it, but though it can be cancelled it is slow even for Ramón standards. These are the safest tools he has to play with in neutral - while he may sometimes fish for a random EX Somersault in neutral, the damage he gets from landing it is nothing compared to what you're bound to take if the opponent hops.

Ramón works best as a point character, where he doesn't have to worry about guard cancels or Shatter Strike interrupting his pressure. His lacking combo routes are not an issue when up first, as his meterless damage is quite high. Though his EX moves are annoying and tricky, building a gameplan around them is unstable. Not only are they unsafe and easy to stuff, but relying on them too much will result in Ramón losing all the meter for his team. Shatter Strike is an extremely valuable defensive option for Ramón; it functions as an anti-air for a character who is scant on such a tool, and he can capitalise on it well with Rolling Sobat and Volando as followups. However, Shatter Strikes from the opponent can screw with his pressure considerably, beating both staggered normals and hops, and because Ramón mainly plays neutral at mid-range you're already controlling air space with j.CD anyway if you want anti-airs. Given Ramón is an obscure, difficult character to use, running him on point also guarantees you get as much experience with him as possible.

After a Feint Step, you are +3 on block if you cancelled any heavy attack or command normal, but +7 if you cancelled from st.CD. Given the latter's 17f startup, it is especially difficult to land without getting mashed out of. As being +3 isn't much to work with, you will have to be aware of opponents mashing jabs, as they will stuff your attempts at frame trapping with anything slow such as cr.C. Quite a few characters can mash buttons that will both stop offensive jumps and cr.C, sadly leaving you forced to wait for an option and counter it accordingly. You will be minus if you Feint Cancel a light attack, but doing so is still useful strictly for positioning.