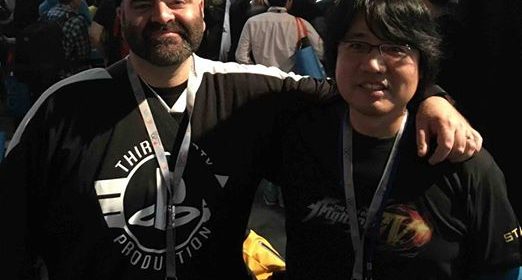 After much anticipation, KOF XIV is finally made playable at the PlayStation Experience 2015 event in San Francisco.  Famitsu has taken the chance to interview KOF XIV’s producer Yasuyuki Oda.

Check out a rough translation of the interview below.

— The SNK Playmore booth is very popular.  What are your thoughts?

Oda:  Oh my, I was relieved.  KOF is very popular in Latin America, it looks like lots of people are coming from there to see the game.

— This time there will be 16 teams, with 50 characters total announced.  Will there be any new characters?

Oda: Yes, there will be new and returning characters to make up the 16 teams.

— How many of them will be new characters?

Oda:  We cannot answer this question at this point.  Please wait for announcements in the future.

— At the PSX venue, King, Iori, Andy, Leona, Chang, and Kula are playable.  Also from the trailer, it looks like Billy, King, and Angel are in the game.  If you look at this line up, there seem to be a focus on “KOF’s classic characters.”  Why is that?

Oda:  Well, the classic characters are certainly going to return.  However, the KOF series has always had a very large and diverse cast.  Let your imaginations run wild about for the complete roster.

— In this verison, there is only one power gauge at the bottom of the screen.  So XIII’s drive gauge is gone?

Oda:  That’s right, this time we’ve simplified the system.  By using the power gauge, you can enter “Max Mode,” which grants you access to Ex supers (it take 1 power gauge to activate Max Mode).

— Why is the XIII’s drive system removed?

Oda:  In XIII you can do Ex moves and drive combos.  Because of this, it has been classified as a “Combo Game,” where there is a big focus on combos.  While a lot of people liked it, many fans who are weak at combos have voiced concerns.  This time we aim to take the middle ground.

— So Ex moves can only be used while in Max mode.  Has there been any changes to Super moves?

Oda:  This time there will be Super, Max Super, and Climax Supers.  Max Supers will be available in Max Mode, they are stronger than regular verisions.  You can also do Max supers by pressing two attack buttons when inputting the comand.

— What are Climax Super moves?

Oda:  They take 3 power gauges to execute.  They are the strongest moves in this game.  They are in a way comparable to Neo Max moves in XIII.  This time the characters each will have 2 super moves and Ex super moves, and 1 Climax super.

— There seem to be some changes to the blow back attacks as well?

Oda:  This time the blow back attacks will cause wall bounce.  You can keep attacking when that happens.

— I get the idea that the offense system has been tweaked.  Will there be more changes?

Oda:  There will be some small changes here and there.  KOF series has many basic systems mechanics.  I want to focus on the basic systems without making too many changes.

Oda:  In recent years, playing at home with online matches has become popular.  Because the level of play varies greatly in online matches compared to the arcade scene, we want to simplify the controls and tactics.

—  How far along is development?

—  So the game is close to completion.  What is your message to fans?

Oda:  To the fans in Japan, we decided to show this playable demo of the game in America, but we want to ensure that there will be opportunities to try out the demo in Japan as well.  Please wait for announcements.