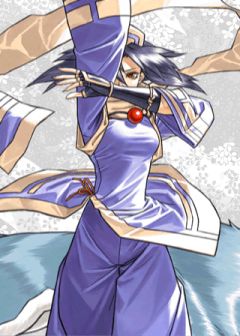 Rera was already cheap enough in V Special, but in this game she has been reunited with tools she had lost from her days as Bust-Nakoruru, which she had lost precisely so she wouldn't be as cheap. In addition to retaining her slippery rushdown, poking and mixup game on the wolf she can now reflect fireballs, go for combos when off the wolf and command Shikuru to attack the opponent while she's down, stripping the opponent of wakeup options without having to waste a valuable resource like Kazuki has to. Rera is a fine choice if you don't want to play Samurai Shodown, as soon afterwards your opponent won't want to either.

Rera is an agile stance character who relies on fast, tricky movement and visual cues to frustrate the opponent into making a mistake. Outside of wolf stance she has access to an amazing air normal in jC and fast pokes on the ground. In wolf stance she loses access to throws and Spirit-specific tools, but gains better normals and specials as well as the ability to dash cancel normals and to run through the opponent for a grounded crossup.

Outside of her stance, Rera's lights and kicks are fairly good and can be used to set up tick throws, deflects or baiting someone into eating a 6D frame trap. 5C has a decent startup, making it a nice tool for stopping careless approaches. In the air, her infamous jC pretty much makes her the boss. jD is also a reliable air to air and can be used to set up tick throws on jump-in due to the lack of hitstop. j2D backdashes give her insane mobility if used properly. Rera now has access to Nakoruru's Kamui Risse (421S), which not only reflects fireballs but can also segue into hopping on the wolf with its alternate followup. Additionally, by pressing AC during a soft knockdown she can command Shikuru to headbutt the opponent while she rolls back safely, which not only shuts down certain okizeme routes but will also catch an opponent trying to meaty her short roll's recovery. While this is fully invincible to strikes, Rera is vulnerable to throws during this move, so an opponent can simply jump over the wolf then throw her as a punish if they haven't committed to catching a short roll. How useful Rera is out of stance is largely situational, but her main goal should be to create an opportunity to safely get on the wolf.

When riding Shikuru, the pace of the match should easily shift in Rera's favour. w412S can punish dash-ins on reaction and whiff punish from a great distance away. Just be wary that it is unsafe even on hit so it must be followed up with something else. wjC and w623S are great for controlling the air. The latter can still lose to a well-placed air normal, but on the plus side she can cancel out of it with w1D/w214S to make it somewhat safe on whiff depending on the matchup. w5A is still a good poke and w5C is still good for stuffing approaches, even more so now that they can be dash cancelled. w3B, her overhead, is a very solid anti-approach tool as well, additionally moving her forward which can create a dangerous wall of attacks when mixed with other normals, specials, and dash cancels. w66S is also good for punishing attacks with a long recovery that Rera's stubby normals are too short to reach, as well having good start up and priority for stuffing anything that might hamper her approach, but it is very unsafe on block so use with care.

On the ground, wolf stance Rera can mix her opponent up with crossover dashes. Dismounting with w7D immediately after crossing over should put her at the perfect range to mixup with jump-in jC or an empty landing into throw. Specials and jumps will reset her position on crossover which allows for a great deal of shenanigans. The most basic grounded mixup is whiffing w3B just outside of the opponent's hurtbox and immediately following up with w3B/w2C. There are a ton of options to keep the opponent guessing. An important thing to note is that the 66~8 trick no longer works for immediate turnarounds, as Rera will now simply jump. If you want something similar you will have to commit to w412S or w623S if you are close enough. Furthermore Shikuru's runstop has been standardised in that Rera is no longer able to block during wolf runstop, meaning you will have to play neutral a bit more carefully.

In the air she has access to jw236S which can be canceled from air normals and cancelled into w214S. The best shot at making this work is to go for w412S at "safe" range then upback out. If the opponent mashes something out here Rera will be able to punish with jw236S on reaction. Mixing air normals in with this special is also an okay option, but be careful not to use either of these too often as it is easy to punish once the opponent wises up. When jumping in with wjC she can frame trap with w5S to keep her opponent honest, then mix things up with w3B/w2C.

Rera's use of system mechanics is unusual. She loses access to all Spirit-related inputs while riding Shikuru, but her supers require that she is mounted. She can WFT while dismounted, but this simply has her hop on Shikuru first and greatly increases her WFT's effective startup. This limits her synergy with many Spirits. V is an excellent choice - she has ample knockdowns and mobility to find opportunities to meditate, she becomes even more mobile while dismounted, supers are of little concern when meditating all your Rage away, and her damage output during State of Nothingness is extremely efficient. IV Spirit gives Rera a better punish when off the wolf with Continuous Slash IV, and Rage Explosion offers a last ditch defensive option when she's on the ropes and dismounted. II Spirit buffs Rera's WFT by destroying the opponent's weapon after it hits, making it a scarier punish tool and ensuring Rera gets to hold onto her momentum for much longer.

Triangle Get Off - j3 near wall

Rera's wolf stance has its own set of normals. None of these are able to recoil cancel, but most can be cancelled into special moves. Shikuru's forward and backward dashes count as special moves in this case.

Epenkine Shikite - AC during a soft knockdown, can be done unarmed