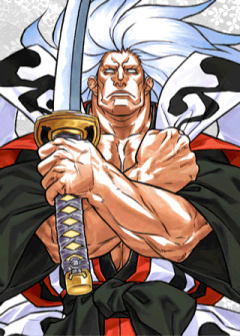 Zankuro has received a few neat buffs, including some low attacks and a better WFT, but by far his most important change has to do with his heavy slashes. Zankuro drains significantly less Weapon Gauge from whiffing his far heavy slash (only 48%, as opposed to the entire thing), and even less from all his other heavies. This means no severe penalty from missing just one anti-air, or the opponent dodging just one meaty. Furthermore, deflected heavy slashes will no longer leave Zankuro disarmed. These system changes allow Zankuro to play a simple recoil cancel game with less risk for more reward.

Zankuro's 5C is boss. It deals the most damage of any heavy slash in the game, reaches far horizontally and, along with his other heavies, will also recoil on block. This thing also reaches far enough to catch backdashes if the opponent is close enough. An opponent up close may attempt to avoid his heavy slashes by jumping instead. Up close this is a grave mistake, as 2C and n5C both sport incredible vertical reach, allowing them to not only serve as effective anti-airs but also catch an opponent trying to jump out easily. However, heavy recoil is a thing, so Zankuro can't always spam his heavies for that. When up close, he can instead use his 5B or 2B for recoil cancels as these have an earlier recoil cancel window which won't get Zankuro killed nearly as fast. 2B, which is also a low, couples well with his overhead 6D. Zankuro may also use his stomp (4632S) as a low-hitting mixup option, but in return for its high damage output it is much less safe. For aerial encounters, Zankuro can also use jB as an air-to-air. jC has a bad hitbox for air-to-airing so it is best used as a jump-in which Zankuro can easily bully with.

Zankuro is spoiled when it comes to recoil cancel options. His fireball (236S), although it doesn't hit low anymore, is his safest option for recoil cancelling and additionally will serve as a fullscreen poke for where 5C will not reach. For something with better reward, he has his burn knuckle (236D) which deals higher damage, causes a soft knockdown, reaches high enough to catch jumps and can be made safer if spaced at the tip of his 5C. However, this can be low profiled by short crouching opponents, in which case Zankuro may have to settle for fireballs or attempt the same thing with his rush special (623S). This goes over lows and deals more damage than burn knuckle, but also leaves Zankuro much more vulnerable. If Zankuro anticipates a slash attack as the opponent attempts to poke him out of his fireball then the universal deflect is a safe enough option, but for attacks like Sogetsu's 2C which are immune to deflects then his counter (214D), which catches any grounded weapon attack in exchange for being a lot less safe, will come in handy. However, the absolute safest option Zankuro has is to do nothing, provided it has enough support. If your opponent has been conditioned not to poke at Zankuro or to block in anticipation of a fireball or something punishable, Zankuro can simply not recoil cancel and recover well before the opponent knows it. The threat of all of his other recoil cancel options are precisely what allows Zankuro to get away with mashing heavy slashes scot free. Provided he doesn't whiff them, of course.

Zankuro has a few viable Spirit choices. I Spirit gives Zankuro the hardest-hitting Hyper Slash in the game, which is not only useful as a punish tool but can also be used as yet another recoil cancel option for him, and potentially a very rewarding one. Be careful that if the opponent reads you going for a Hyper Slash then you will be deflected and you will be disarmed. If you want to use Zankuro's WFT, which is considerably a lot more useful in this game than before, then VI Spirit is a fine choice because it mitigates Zankuro's short Rage duration and rewards him with extra meter for using heavy slashes, which universally build more meter than other normals. V Spirit may also be considered because it grants the strongest bonus for having a full Weapon Gauge, while at 5C range is where Zankuro can usually afford to meditate safely.

Fists Of The Lawless - 236D, can be done unarmed