The King of Fighters XV/Gato 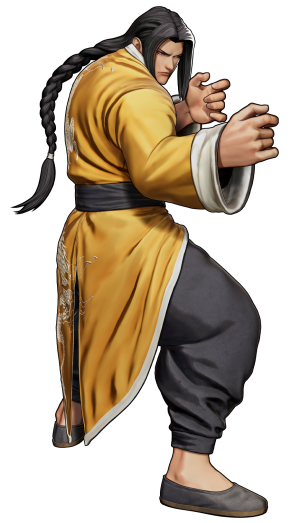 This cold and calculated master-class fighter always strays away from the pack. He set out for vengeance after his mother died at the hands of his father. Though he wishes to go his own way, B. JENET was able to convince him to join the team as she has some info on his father’s whereabouts.

The fiendish top tier of Garou returns to KOF XV. Gato is an extremely fast rushdown type whose gameplan revolves around his "demon flips"- Wind Fang and Backdraft Fang. By performing these special moves, Gato will launch himself into the air, where you can follow up with a button to perform one of four unique moves. Gato has a full set of four moves for each of his two stances, totaling eight special moves, each with EX versions. Correctly using these demon flips allows Gato to effortlessly work his way in against his opponent, where can then run a powerful mixup game. In the corner, Gato can demon flip into a high, low, command grab, pressure reset, a divekick... you name it. If that's not enough, he can also consistently convert these options into big damage, which builds him great meter very easily. As a final cherry on top, Gato has good abare and a DP, which is very unusual for a rushdown character to have and makes him infuriating to pressure. While Gato's moveset is unconventional, it is far from bad and gives him a huge amount of options in neutral and pressure. Successfully learning his kit opens the door to peerless pressure and mixup.

Ultimately, Gato's moveset covers all the bases you could possibly want in KOF XV, thus making him an incredibly solid character that is hard to contest.