The King of Fighters XV/Terry Bogard 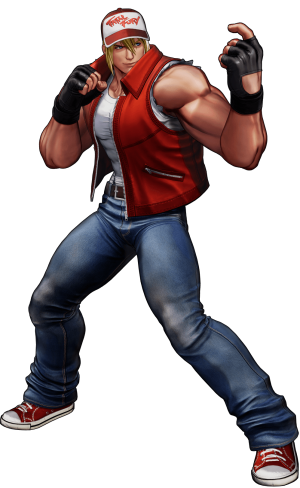 After their adopted father and martial arts master Jeff Bogard was cruelly assassinated by crime lord Geese Howard, Terry and his brother Andy Bogard set off on a mission for revenge where they would travel the world learning various fighting styles. Terry’s bright personality and acts of kindness solidified him in the eyes of children on the streets as a sort of hero.

Fatal Fury's legendary Hungry Wolf, Terry Bogard, is not one to miss out on a King of Fighters tournament, and he always comes back a bit different from the last. In The King of Fighters XV, Terry bears a close resemblance to his '98 iteration, featuring an all-motion input moveset (dropping the charge motion for his DP), but more important than that is how strong Terry is this time around. In this game, Terry finally has access to his Power Dunk (623K) leaping punch again, the heavy variant being armored so he can muscle through zoning attempts. Terry's light Power Charge (426B) is also cancellable into Rising Tackle (623P) or Power Dunk, leading to high damage combos or okizeme.

Terry also has an assortment of specials that are safe on block, such as his EX Power Wave (236AC), a long-range Burning Knuckle (214P), his heavy Power Charge (426D), and his Crack Shoot (214B/D), which ranges from -2 to -1 on block, allowing him to launch a frightening offense that can obliterate guard meter.

Terry isn't without his flaws, of course. As his nickname may imply, Terry isn't at his strongest unless he has plenty of meter to burn. His only overhead is locked behind EX, so he has no way to initiate a highly-damaging combo with an overhead, not to mention without meter. And while many of Terry's standing normals have a lot of range, they're all only super cancellable, so he'll need 2 bars to do any real damage with them. For these reasons, Terry is typically placed in the mid or anchor position, where he has the meter to initiate combos that do plenty of damage to both the opponent's life bar and their guard meter.

If you're new to KOF, know Terry from his variety of other appearances, or want to deal big damage and make a comeback, Terry is a great choice for you.