Keep in mind: The combos in the "Combos" section have been tested using the first starter in each category (the combos in Bold).
The other starters in each table should also work in each case, but may not.

2B 2A vs c.D starters vs crouching/standing

CD Hurricane Upper in the Corner

Outside of zoning, Joe is also known for his explosive stun routes which can spell death in the right situation.

His ideal route involves using quick max (BC) in the corner and then going straight into CD and then light Hurricane Upper (426A), creating an autotimed restand in the corner.

When you restand the opponent, you are plus enough to do cl.D or 5A, with cl.D being the preferred button to use because of the damage and stun.

However if tagged in the corner by a raw CD, the combo becomes rather finicky depending on the distance, where: 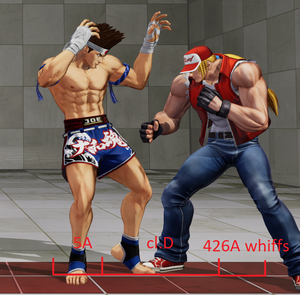 Joe facing Terry in the corner.