The King of Fighters XIV/King of Dinosaurs 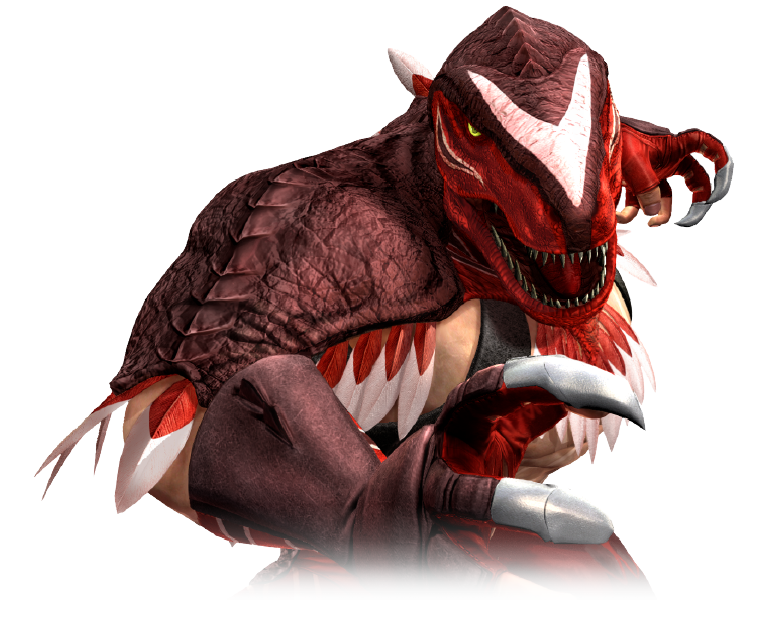 The King of Dinosaurs is a slow, "power"-style grappler like Daimon or Maxima. Since he lacks the mobility to be highly aggressive like Clark or Ramon, the King must rely on slow, careful movements to provoke his opponents into making big, punishable mistakes. In exchange for his low mobility, he has several armored normal and special attacks with which to deflect projectiles, jump-ins, and pokes and attempt a free punish. He also has a fast command grab to punish otherwise minor mistakes, and a long-ranged jump D with which to poke or lock off air space. He gains even more and better armored and punishment tools in MAX mode via his EX Assault Raptor and EX Zetsumetsu Hurricane. With that said, the King's low mobility is his biggest problem by far -- he has some good offensive and defensive moves, but can seriously struggle against many opponents to gain or keep the ranges where they work best. His combos are simple enough for beginners to perform, but the difficulty of his neutral game makes him better suited for experienced players who can work better around his limitations. But if you want to learn how to play a strong defensive style, the King of Dinosaurs is an excellent platform to teach you the fundamentals of smart defensive grappling.

EX: Starts up fast like A version, moves forward about 1/4 screen, full-body autoguard. Great for plowing through pokes for a knockdown.

EX: Will grab crouching opponents. Significantly faster to start up and travels farther at a faster speed. A very good long-range punish on projectiles at neutral, but not projectile-invulnerable.

Meterless: Minus but safe on block for 2nd and 3rd hits. A good 0-bar route from cr.B because it results in the most meterless damage from that starter.

1 Meter: Ends with Dinner of Dinosaur. Slightly wasteful on hit because there's no special before the super, but you can OTG afterwards to recover some damage.

EX: The least efficient version since you can't OTG after MAX Dinner of Dinosaur.