The King of Fighters XIV/King 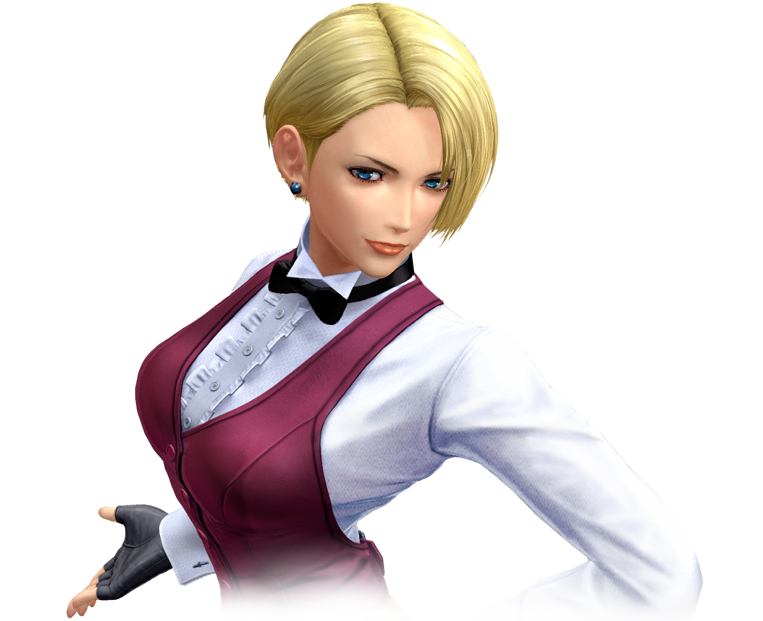 King is a well-rounded zoning character with one of the most versatile sets of normals in the game. She has pressure normals, whiff punish normals, and anti-air normals that are all extremely easy to understand and use properly by any style of player. King sets the pace of the match either by lobbing a B Venom Strike projectile at the opponent to force some sort of movement, or moving into medium range to make use of her great anti-low-jump options like her st.C, st.D, and even her st.A. She has great air-to-air as well, including her j.A, j.D, and j.CD normals. She does consistent damage anywhere on screen and is pretty good at building bar safely. Her only significant limitation is the lack of a meterless "DP"-style move with which to fend off air attacks -- despite having a DP motion and an upward kicking animation, her Trap Shot special is meant to stop low attacks, not jump-ins.

King is one of the best platforms for new KOF players to learn the fundamentals of the game, since she has normals that perfectly complement strong footsie fundamentals. She is an excellent pick for beginners and KOF veterans alike. You can make King work anywhere in your team order, though she is highly reccommended for the 1st and 2nd slots to build meter, since she requires so little of it to be effective.

EX: Fires two fireballs with similar speed of the heavy kick Venom Strike. Hits twice upon impact. Both fireballs knock the opponent down on a clean hit.

EX: Hits 3 times, and creates a juggle bounce on the last hit. The flip before the 2nd and 3rd hit can evade some mid-air projectiles if timed correctly.

EX: Hits 8 times, and features a small amount of startup invincibility (not from projectiles though). Good to use as a combo finisher or anti-air or reversal option.

(Ends in a hard knockdown)

(This combo must be performed very close to the opponent or else the dp+K will whiff.)

(You activate max mode in the tornado kick motion. Less damage when start from cr. B, cr. A, df+D [BC]. Easily works with st.C/st.D starters too.)

(A j. D can be used to start this combo. You can omit the df+D for less damage but for an easier connection Less damage when start from cr. B, cr. A, df+D [BC].