The King of Fighters 2002 UM/Angel 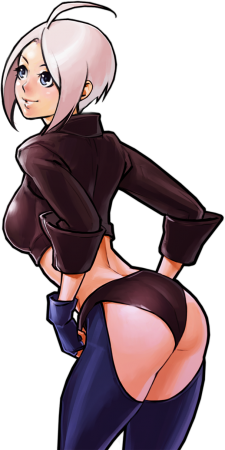 At Wasteland - in air,

Citizens of the World -

With A Lamp For Pathway -

Angel is a very unorthodox character with a completely unique combo flow and almost unrivaled variety of strings and mixups, however held back by her low-ish damage and overall complexity. At the core of her gameplay lies "unchain"—basically, a chain much like a rekka, but you can choose from a number of the available starters, link hits and finishers to create your own custom chain, as well as cancel some of those into feints / teleports / other. Most of Angel's moves are part of the unchain and can chain into others. Unchain is filled with useful tools such as lows, overheads, grabs, an unblockable, said teleports / feints and other tricks. The player is free to create elaborate mixups and long unpredictable pressure strings. However, this is not easy to do and requires a thorough understanding of pressure/mixups and Angel's highly unorthodox tools (sometimes with pretty tough execution requirements), but even then the damage reward for these is often fairly low. Not only that, Angel doesn't really have much beside the unchain, and both getting in and dealing with pressure can be a real problem for her. The high complexity and the lack of some basic tools makes learning Angel a very tough task for a beginner.

At Wasteland - d+D in air 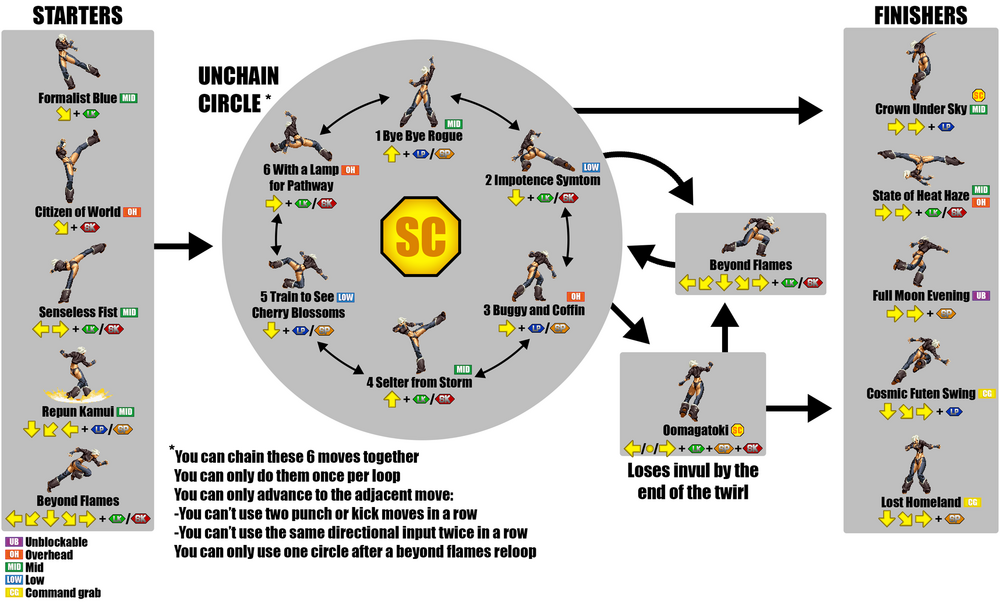 Citizens of the World - df+D

If an Unchain Link was inputted, the weak version (hcf+B) will tackle the opponent and then teleport behind and do the Unchain Link move. The tackle isn't a low nor makes the unchain link a true blockstring let alone a frametrap, as soon as the opponent blocks it they know they can reversal for free the other side or even outright hit Angel out of unchain for full punish. hcf+K alone and hcf+B as a starter are virtually useless.
Inputting the Unchain Link after the strong version (hcf+D) will immediately cancel the dash into said Unchain Link, this can prove pretty useful to bypass the pushback on some moves and get better combos.

With A Lamp For Pathway - f+K

Where it becomes interesting is that both versions of the finisher can be used like the heavy version of the starter. In other words, inputting an Unchain Link after this finisher will immediately cancel the dash into said Unchain Link, thus starting a new Unchain string. However it is important to not that unlike how you can do up to 3 Unchain Links off an Unchain Starter, an Unchain string started from a hcf+K finisher is only allowed 1 Unchain Link before having to go into a finisher.
Due to the nerfs of her 02 juggles this move isn't the heart of her combos anymore, but looping her unchain moves with this is still the basis of her close-up pressure and shenanigans so try and be creative.

b,f+K(1) will whiff on crouching(K’, Joe, Benimaru, Iori, Mature, Vice, Leona, Athena, Kensou, Mai, Yuri, Yashiro, Chris, Kula, Foxy, Jhun, Angel). It does work on crouching(Bao, Chin, Choi) though, somehow.
If you replace cr.B/A with st.B/A, you can do it as cr.B, b+B/A, f+K. st.A has less range and more height making it whiff on the same crouchers as b,f+K(1) plus crouching Bao. Using cr.A is best.
You can add an extra cr.B but then the combo will start whiffing on some characters unless it's after a jump cross-up. If unsure, don't.

b,f+K(1) and df+B do the same damage but the former is safer and gives you more range. Default to it if you can do it reliably.
b,f+K(1) will whiff on crouching (Bao, Jhun, Yuri), use df+B on them instead.
To add a jump-in, you need it to be pretty deep so feel free to remove f+B(1) for consistency after a non-cross-up jump-in.

Your low option without unchain, very tight, hardly ideal. You can add another st.B but it's incredibly tight, not recommended.

Your only option if you don't want to use unchain moves. Not much damage but nice and simple.

Whiffs on crouching Bao on top of the ones previously mentioned. You can add a jump-in but it'll be pretty tight if it's not a cross-up.

These last two are your main bnb's from standing. This one gives you much better oki but it whiffs on crouching Bao and the others too.

Main bnb from jumping. f+K has more damage and range so is preferred on hit while d+P is much safer so preferred on block.

Okay damage but poor oki, the previous one is preferred.

Less damage but better oki than the starter route.

No reason to do this one outside of the fact that you can whiff d+P and the qcf+C will still land.

Not actually very useful but fancy. It's much easier to do the full version close to the corner. You can't do it in dead corner.

Same damage as above on a slightly easier combo.

Good to know how to convert off a meaty qcb+P.

The damage values are without jump-in and with the optional brackets.

You need to whiff cancel qcb+P into u+P fast enough to not see qcb+P actually start. This is unnecessarily hard, use the next one instead unless you wanna style. 42%.

Needs a fairly tight run but worth the damage for how short it is. You can omit the f+B(1) after the run to get a bit more leeway. 42%.

Instead of walking, you can run then activate or the reverse. If you activate first, buffer d,d during it then f,f to run and quickly d+CD. Obviously no need to run in the corner but you should default to walking in the first place, it's easier. You can add another st.B but it's incredibly tight, not recommended. 54%.

Longer version of the previous. You gotta start this one a bit away from the corner, you want to be very close to the corner by the qcb+P cancel. 45%.

Longer version of the previous. 46%.

You need to whiff cancel qcb+P into f+K fast enough to not see qcb+P actually start. This is unnecessarily hard, use the next one instead unless you wanna style. 46%. You can do b,f+K(1) instead of f+B(1), hcf+D to get 47%

Needs a fairly tight run but worth the damage for how short it is. You can omit the f+B(1) after the run to get a bit more leeway. 47%.

If you're close to the corner just do raw BC then d,d,d+CD to make it 2 stocks instead of 3. You can add another st.B but it's incredibly tight, not recommended. 54%.

You need to slightly delay u+K against Yuri to get the f,f+K hard knockdown. 68%.

This section will cover Unchain Circle Link Chains, Unchain Starters/Links/Finshers that combos or go into DM. This doesn't account for max mode-only routes.

Unchain Circle Link Chains
On shorter chains you can swap parts but there's only one logical route to use all 6 links within the same loop.

Citizens of the World - (df+D)

Her UC (chain) system is pretty much the same, but :