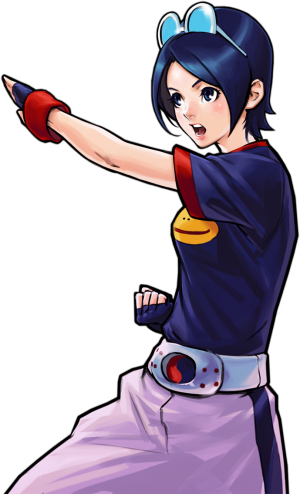 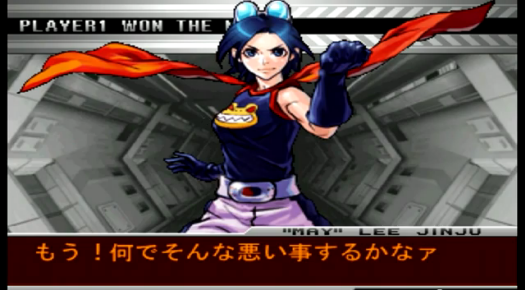 May Lee Dynamite! - in air,

A comfy low string to chip and mostly keep the opponent at distance. 14%.

Normal meterless bnb, easy and great oki. uf+K whiffs out of the corner but d+K connects if done quickly. If the opponent doesn't reversal but blocks, d+K is plus, allowing for further pressure on passive opponents. qcf+B fails on all crouching and a lot of standing characters, not recommended. Out of the corner, 23%.

Normal-to-hero secondary bnb with better damage but less consistent because of cr.C as noted at the top. If the opponent just blocks, qcb+C is very plus, allowing for further pressure on passive opponents. However they just have to crouch to make qcb+C whiff then punish. Default to this if the opponent is standing, 40%.

Cooler and a bit harder but safer version if you're not confident in your cr.C link. This gives you time to confirm you landed the link before going forward with timing qcf+K so that the opponent falls on the first kick. Still limited to standing opponents, 28%.

Poorly optimized normal-to-hero route. Not much reason to use this other than fishing for the hcb,f+P ender which by the way won't connect after a front jump-in. With qcf+A, 33%.

Fully optimized normal-to-hero route. Good damage and confirm although hard to land because of st.D being a 1f link. If you're confident in it use qcf+B for hard knockdown and better oki, otherwise qcf+A is much safer on block. With qcf+A, 40%.

Decent counter conversion although said counter isn't reliable enough for this to come into play too often. The run isn't needed close to the corner. 22%.

Worse damage and oki than the bnb version, use the bnb. 24%.

Corner version of the cooler normal-to-hero conversion. Next route is preferred for being easier with better range and enders. 32%.

Easy and damaging normal-to-hero conversion that you can start only a bit away from the corner for df+K to reach. Without an issue of confirm this time, qcf+B gives a valuable hard knockdown's oki over qcf+A's extra 2% damage. With qcf+B, 30%.

Easy normal-to-hero 1 bar conversion. You'll need to delay qcb+C more or less depending on screen position, especially to land the better qcf+B ender. Not particularly hard however, just some awareness needed. With qcf+B, 46%.

Easy but poor damage, not recommended. 32%.

Much harder for the same damage as the above and more inconsistent because of cr.C, not worth it. 43%.

Good basic 2 bar bnb conversion. You'll need to delay qcb+C depending on screen position, you can then TK the super as qcf,uf,qcf+C. 60%.

Very easy 2 bar conversion although cr.C's issue with crouchers noted at the top limits its usage to mostly standing characters. 49%.

Only real low normal conversion and pretty underwhelming in both range and damage. You'll need to delay qcb+C more or less depending on screen position, especially to land the better qcf+B ender. With qcf+B, 48%.

Interesting but pretty unreliable max conversion since qcb+A will whiff on standing Choi and every character crouching except Whip and Chang. 44%.

Good damage but qcb+A still whiffs on standing Choi and every character crouching but Whip and Chang. If you haven't reached the corner yet it also whiffs on standing(Kensou, Chris, Leona, Foxy, Billy, Takuma, May Lee). That inconsistency but st.D's 1f link is a bit too much for comfort. 62%.

Slightly less damaging but a bit more consistent. qcb+A whiffs on standing Choi and every character crouching but Whip and Chang. 58%.

Same damage but harder than the previous one on top of the issues with cr.C, not worth it. 54%.

Tight timing but the damage is somewhat worth it if you can do it. 62%.

Very cool-looking but not much reason to go for it outside of that. 55%.

Good low conversion although the next one is preferred. You can add a cr.B but it's fairly inconsistent. st.A's 2nd hit whiffs on crouching(Bao, Jhun) making the cancel very tight on those two. 45/50%.

Easy conversion with good damage. Delay qcb+C according to screen position. Reminder that this route doesn't work in dead corner. 71%.

Less fancy and more reliable for the same damage. 62%.

The run is only needed if you're a bit far from the corner. 51%.