The King of Fighters 2002 UM/Blue Mary 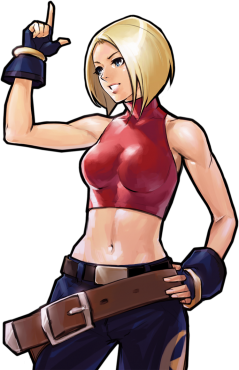 Mary is a rushdown character with an element of risk/reward to her. She has solid air normals to chase with, mainly j.D but also j.C and j.CD for when the opponent is too high for the former to connect. She also has Straight Slicer to low profile through and hit low but it can be very unsafe, the light version is recommended for being very safe when spaced properly. Most of her special moves have hard knockdown followups, making it very easy for her to stick to her opponent. She has two meterless reversals: a standard DP and a dodge which features an instant grab followup (essential to her mixup game), but is vulnerable to throws itself. Her weaknesses include some of her ground pokes being laggy and her special moves being easily punishable for the most part, requiring her to commit heavily to her decisions.

Mary's Maxmode combos are relatively easy to perform and to convert into, but she is also quite good at building meter herself. Mary can do well in any team position, but given her risky nature you might want to use a more dependable character as your anchor.

Getting the second light and still combo is fairly tight.

A bit more comfortable, your best low confirm into plenty of oki.

No knockdown but your easiest and safest route from low.

qcf+K is hard knockdown and give better oki while qcf+P>u+D is soft knockdown so worse oki but better damage. Use b+A to start charging b~f+K early. Default to this combo when meterless.

You can shortcut the end as b~f+D > qcf+A, A, (C)dp+B(1), C. Not much more damage than the anywhere route so you can stick to that one if you have issues with this.

You need the corner if you use b/f+B into A,A,b,B,C. f+A can count as the first A for the sdm.

Don't use this unless it kills and you're scared of missing the 2 bars max.