The King of Fighters 2002 UM/Benimaru Nikaido 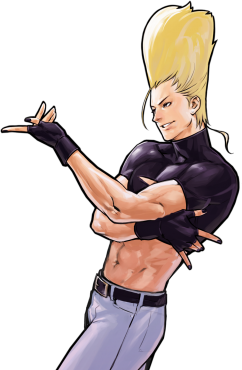 Benimaru is a character with very good normals that can be somewhat easy to use. his game is based often on confirms from cr.B and cl.D/C. His space control with qcf+A decent, especially coupled with the normals he has (far.D, cr.B, far B, cl.B and far.C). The moves central to his confirms into super are qcb+P from strong normals and qcf+D from lows. Although somewhat lacking range and being negative on block, the qcf+D's very good pushback makes it hard to punish. Add to that a more than decent DP with not much recovery that helps him to make his gameplan of space control even stronger.

Okizeme/Wake-up Advice: Can be used to cross-up with j. D, or empty jump into command throw, or cr. B, etc. Experiment with different moves and approaches!

Flying Drill: in air, down + D

Combo Advice: Can be combo after close standing heavy attacks

Safe string to poke the opponent and create space. st.B whiffs against standing (Choi, Bao) and everyone crouching except for Daimon, Maxima, Chang, Seth, Whip, Xiangfei. cl.B doesn't whiff on anyone but you need to be point blank and do a very fast chain to get it.

On hit, qcf+D > d,u+B is better but you can use dp+D if you think you're too far. On block, qcf+D and dp+B are fairly safe. Stick to 1 cr.B against crouching Bao.

On hit, dp+D gives you a knockdown for the same damage as qcf+D. On block, stop at cr.B or stick to dp+B.

On hit, hcb,f+P > qcf+K does the most damage and can setup a safejump while qcb+A does a bit less but converts into super. qcf+D is best on block.

A simple way to do this is to input the last cr.B as qcf,d+B then do qcf+A to trigger DM.

This is your standard 2 bar combo from a jump-in or cl.D. You need a deep/cross-up jump-in to cancel qcb+C(4) and reach in time.

A bit easier and more range but less damaging. If the combo above is giving you trouble, default to this one for lows.

Much easier low conversion but only point-blank and no room for hitconfirm to avoid activating on block outside of punishes. If you can, use one of the previous two instead.

Max mode combo, the standard non-max 2 bar combo is preferred as it's easier and does more damage. You can add a second cr.B near the corner against everyone but Shermie, crouching (Vanessa, May Lee) and these inconsistent characters.

Max damage 2 bar combo with a pretty tight max run but it doesn't work on Shermie, crouching (Vanessa, May Lee) and these inconsistent characters.

Hard max run on this one. You can do it midscreen but it's even harder.

A simple way to do this is to input the last cr.B as qcf,d+B then do qcf+AC to trigger DM.

3 bar max mode combo, does about 9-10% more than the non-max 2 bar super cancel, so it's there if you need the extra damage. If you do 2 cr.B's, d,u+B whiffs on Shermie, crouching (Vanessa, May Lee) and these inconsistent characters.