The King of Fighters 2002 UM/Joe Higashi 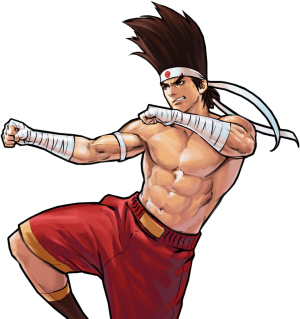 Do you like mash moves? If the answer is "hell yes", you're gonna love Joe. If not, he's still ok, but without mash he will be kinda average. Anyway, Joe has pretty standard tools and easy BnBs, although he doesn't get much for mixups. However, his mash P move can make him much better - the problem is, you will need to mash quickly and a lot to get it.

Joe's buttons are pretty standard, but with a few highlights. cl.D is one one of the best meaties in the game that is +4 on block (!). His sweep has great priority and is cancelable. His far buttons are all fast, and he gets okay blockstrings off cr.A/st.A. Nice j.B and j.C, as well as j.D that has great angle and reaches low, and add to that a crazy fast air-to-air j.CD. Let's not forget that his C throw is a "mash throw" that you can't tech, which is useful. For specials, his hcf+A is a quick short-range projectile, useful mostly for blockstrings and anti-hop. His DP is good as reversal, but very unsafe and has weird angle for an anti-air. qcb+K is a great pre-emptive anti-air, as you can juggle after it on hit. hcf+K is a nice safe-ish kick for easy BnBs that deals hard knockdown.

Now, mash P. It gives Joe a good low/light confirm, as he can combo from cr.B, cr.A, df+B into it. The issue is, you need to input it real quick after the slide, and you can't really "cheese it" - you just have to mash fast. The reward is high though, you can even add supercancel for some good damage. Joe's max mode damage is very high, and even his easier 3 bar gets him ~68% from cr.B. But if you want an extra 10-20% for absolute crazy damage, you will need to cancel 1 hit of DP into mash P. Ouch.

All in all, Joe's best combos are masher's paradise. If you don't care about them, you can absolutely pick Joe for his simplicity and easy damage. However, don't be surprised that past certain level, he will turn out a bit basic, and you will feel an increasing pressure to mash to get more out of him.

Combo Advice: (optional cl.C/cl.D), f+B into which ever special or DM move is an easy confirm

Combo Advice: the light kick version (B) can only combo after cl.C/cl.D, f+B

Combo Advice: The punches can easily combo after a cl.A or cr.A but you need to be quick with the inputs to active the rapid punches or they wont combo. Try cr. B, cr. A, Ax4 quickly. In practice mode, set the dummy to 1hit guard for you can practice the timing of linking the cr. A (or st. A) into the punches.

Combo Advice: If you hit an airborne opponent with Joe's qcb+B/D, throw this super out to hit them while they are in a juggle state. The biggest part of its damage is at the start so try to delay the super to hit them low to the ground when possible.

You can always replace cl.C by cl.D or cr.C. Because of the slightly disjointed hitbox, cl.C will whiff on crouching Choi when point blank.
If you have less than 2 bars you can always do df+B as df+BC which starts buffering a punch making easier to cancel it into [A].

If you have less than 1 bar you can do df+B as df+AB too.
Reminder that you can mash with any punch and it's the last of the 4 punches that decides the version. C,C,C,A is an [A] mash.

Note that outside the corner, qcfx2+A after any [A](X) > qcf+A will whiff on these characters and standing Robert minus the st.Kyo_Foxy-tier. Use qcf,hcb+P on those instead.

Easy meterless bnb, use hcf+A or qcb+B on block. hcf+D has better damage and hard knockdown but can whiff, use hcf+B on crouching (K', Joe, Benimaru, Iori, Mature, Vice, Leona, Athena, Kensou, Mai, Yuri, Chris, Kula, Foxy, Angel, Chin). You can use hcf+D on crouching Choi, Bao and everyone else.

Depending on spacing you may have to slightly walk forward before pressing far D. dp+D only in corner. j.B/CD are very height/spacing dependent. far D is preferred.

Try to land the tk very low for more damage

Hardly ever useful if you can do the next ones. Shortcut the SC as f,qcf+D(1) (SC) qcf+P.

If you do 3 lights, qcfx2+A becomes pretty tight to land outside of corner. Stick to qcf,hcb+P in that particular scenario. No issue using qcfx2+A off cl.C.

A more reliable way to land qcfx2+A midscreen after 3 lights.

A basic and easier but bad max route. This does less damage than the previous two on top of being harder and having more limitations so it's useless.

Works midscreen against backturned opponent or infront on Chang, Choi, crouching Xiangfei and standing Bao. If you use cl.C/cr.Ax2 after BC, stop each [A] on the first hit. The few percents gained from cl.C/cr.Ax2 aren't worth how tight the combo becomes. You can cancel dp into mash as Ax2~3, dp+D(1), Ax2~1 and even Ax1~2, dp+AD(1), Ax2~1.