The King of Fighters 2002 UM/Clark Still 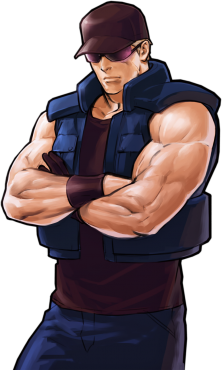 Clark is a mainstay KoF grappler. He has a good 1f grab, as well as an array of other great tools that help him create scary mixups and oki. One of the moves he's notorious for, Frankensteiner, is a slow delayed grab that is fully invincible through its startup, which opens up scary potential for wakeup grabs and even anti-airs. This time around he also has his Gatling Attack (b~f+P) move that works as a fast punisher and/or combo tool. Although Clark isn't very slow, his biggest weakness is still getting in and defending VS pressure. Still, up close he can force the opponent to play his deadly mindgames, and as someone put it, "Clark is top tier if you guess right every time".

Combo Advice: Both versions can combo from cr. A but a more useful combo example is j.A (optional) cl.C (1 hit), back+B, charge b+f+A/C)

cr.A and cl.C(1) have about the same range and cl.C is slightly faster so little reason other than preference to use the former instead.
cl.C is awkward to connect after a jump-in on crouching Bao and the 2nd hit will whiff.

cr.B is plus on hit so Clark can link hcf+K after it for a decent hitconfirm. 24%.

Good damage and hard knockdown leading to good oki but no room for confirm so best after a jump-in or as a punish. 30%.

While the charge is more restrictive than the previous combo, the slightly better damage while keeping hard knockdown is good as a punish or jump-in conversion. 31%.

Good damage, finally a confirm to rely on but less jump-in friendly than the previous ones. Deep or cross-up jump-in only. 31%.

You don't have to cancel st.CD, it recovers fast enough to link b~f+C. st.CD is much too slow to ever land this on a semi-decent opponent but knowledge doesn't hurt. 39%.

cr.B is plus on hit so you can link the super after it. Tedious and the damage isn't really worth the meter if it doesn't kill. 30%.

Hard without a jump-in to buffer the first hcb and cl.C as f,df,d+C,db,b. You can also do it j.A, hold A, hcb+C, let go A, hcb+P, whichever you prefer. The very little extra damage isn't worth it. 35%.

Low max conversion. The damage is interesting for a low and it's much easier than the 1 bar version. 35%.

Very easy max conversion to default to. Although the damage isn't too great, at least it's easier than the next one. 43%.

The only max route worth the damage but very hard to do. No tricks, just very fast inputs. 50/58%.

cr.B is plus on hit so you can link the super after it. Tedious and the damage isn't really worth the meter if it doesn't kill. 45%.

Low max conversion. The damage is interesting for a low and it's much easier than the 1 bar version. 50%.

Very easy max conversion to default to. Although the damage isn't too great, same damage as the hard 2 stocks one. 58%.

You do not have to switch directions for the third part of the move. So the input looks like: