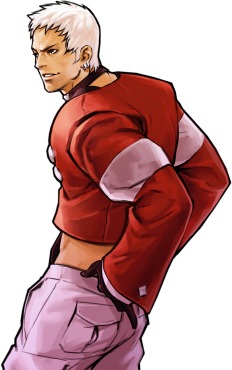 Yashiro is a close / mid range character who mostly excels at pokes, blockstrings and big combos. On paper, his combo damage is very high, both with and without bar. However, his very limited confirms and mixups make it hard for him to actually land the said combos. Not only that, he can be very reliant on getting into close range. For this reason, the most common way to play Yashiro at high level is often just using his long blockstrings / frametraps and "punching the opponent until they open up".

Written as is you can add a jump-in to every combo provided you remove a cr.A if the combo starts with one.

Replacing cl.C and f+A by cl.D and f+B does more damage but also more pushback, making them harder to fit with a jump-in.
Similarly, you can replace the first cr.A of a chain with cr.B for a low starter but the timing for cr.B, cr.A is annoyingly awkward so it's not recommended.

cl.A whiffs on everyone crouching but Whip and Chang so make sure the opponent is standing or you're far enough to get the more reliable far A, like after 2 cr.As.
His max combos carry a lot so the corner ones can actually start more than 70% of the screen away from it. They only need to end in the corner.

Good and easy poke string. hcb+A does more damage but it's very punishable if you don't properly confirm into it. If unsure, stick to st.B. 17% with hcb+A.

Your main, very reliable bnb. sj.D gives you better damage and carry and is a better reset altogether, use st.B to keep your distance. Stop on hcf+AC on block to stay pretty safe. 32% with sj.D.

Corner ender for the bnb, good damage and solid oki. Stop on hcf+AC on block to stay pretty safe. 36%.

Not a low conversion which sucks but still practical since cr.A is fast and has decent range. Do it as cr.Ax1~2, qcf, cr.A/st.A, qcf+A. 33%.

One of the best 1 bar conversions the game has to offer, easy, good carry and very damaging. If you have 1 stock, this is the combo you want to do. Stop on hcf+AC on block to stay pretty safe. 47%.

You can replace cl.C, f+A, BC run with f+A, BC run for a good overhead starter into the same max routes.

Too tight for comfort. Making the first cr.A a cr.B gives you a low starter but it gets even tighter. Overall not very practical, it's better to open the opponent to f+A overhead into max for mix-up. 46%.

Similarly, can find use but too situational and/or finicky to be practical. 54%.

Easy and damaging non-max combo to just dump meter on if you can't use max mode yet. 59%.

The most basic max combo you would see beginner Yashiro players use and that you should make sure you stop using. Less damage than the previous and utter waste of max time. 55%.

More damaging ender for the previous combo. You can use dp+C(1) instead of qcf+A but it's incredibly tight for very little reward, not recommended. qcf+A whiffs on crouching (Benimaru, Mature, Vice, Andy, Yuri, Athena, Kensou, Leona, K', Kula, Foxy, Angel). Omit it on those, in which case you should reverse the loop since hcb+C(3) would be easier to SC. Will full mash, 36 hits, 75%.

Easy and damaging corner non-max combo to just dump meter on if you can't use max mode yet. 65%.

Optimized corner version of the main 02um route for 3 bars. 73%.