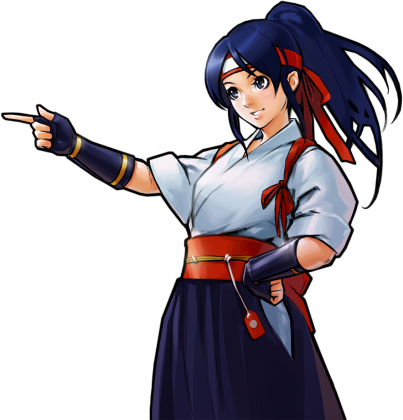 Kasane Ate - on ground or in air,

Kasumi is a notorious top tier of the game, and the easiest out of the top characters. Her tools are all very standard for KoF, but what sets her apart from others is very high damage, safety of her tools, and an exceptional crossup / jump attack j.D. If it wasn't enough, she also gets some of the easiest Max Mode combos in the game, as well as an anywhere juggle HSDM that extends her combo potential even more, making her strong in any team position. Despite her simplicity, Kasumi makes an excellent pick on any level of play.

Damage values are without jump-in and for cl.C, f+A starter. You can add a jump-in to every combo that starts with cl.C.

Basic and easy bnb you should default to if you haven't confirmed the hit. Doing cr.Bx2, cr.A is possible but not advised. On block, ending with one qcb+P is safe on most of the cast.

More damage, no reason not to use this if you've confirmed the hit. You can use another jump button for air reset mix-ups.

The run into qcb+D is very tight midscreen and only does 2% more than the easy j.CD. Should be preferred in corner, where you don't need to run and can whiff cancel cr.A instead to get the timing.

Punishable on hit in the corner if the opponent techs the knockdown, preferred midscreen. Does 42% damage.

Doesn't knockdown in the corner and is punishable on hit there, preferred midscreen. Does 45% damage.

raw f+A is a great overhead and cl.C, f+A is the classic option to hitconfirm or convert off a jump-in.
For either, if you stop at f+A(1) you can just BC walk to continue the combo. If you go for f+A(2), you have to run.

hcb,f+C(3) does more but may whiff after f+A(2) on Bao, Shermie, crouching Daimon and these inconsistent characters.
If you can't be bothered default to Starter (BC) cl.C, f+A(2), hcb,f+A(2).
It's not recommended but you can omit the hcb,f+A/C if you're really bad at that motion.

Easy and decent damage. If the jump-in isn't deep enough or a cross-up, cancel f+A's first hit. Super cancel hcb,f+A on the 4th hit midscreen and the 3rd in the corner. 2 hits of f+A, it does 55% midscreen and 49% corner. Only cancel on the 4th hit on Angel regardless of spacing to avoid whiffing.

This is a true guard break blockstring that leads to ~30% damage if the opponent has no stock to GC out of it. Midscreen, you need to briefly walk forward after the guard break. In the corner, for more damage you can replace hcb,f+A by hcb,f+C if the opponent isn't Bao, Shermie, crouching Daimon or an inconsistent character.

Harder but more damaging corner variant of the SC combo. You need to time the qcb+D so that the first hit lands very low for full damage which makes it pretty tight. Doesn't work on Angel. Not worth going for over max, 57%.

qcfx2+AC does less damage if you're too close to the corner so when you can, walking back is best.

You need the hyperhop CD so that the opponent doesn't land and tech the knockdown to then block the super. The window for it is pretty tight, use the next two instead. Does 79%.

Your default 3 bar conversion. You need to walk a bit if you are far from the corner or the opponent can land and block before the super reaches. Does 82%.

No need to walk on this one but if you don't cancel the first hit of f+A, hcb,f+C will whiff on Bao, Shermie, crouching Daimon and these inconsistent characters. st.CD only near corner. Does 82%.

Very good 3-bar max route you can default to, easy and perfectly consistent. 78%.

3 bar version of the guard break combo that leads into 59%. The opponent can recovery roll through the hdsm and full punish if you're not close enough to the corner but the combo travels a good 75% of the stage so it's not a big deal as long as you keep it in mind.

Anti-air the opponent, then do the HSDM when the opponent rises slightly above the life bars. If you use qcb+D the opponent can recovery roll and punish.

↑Start-up is higher than 37 frames