The King of Fighters 2002 UM/Takuma Sakazaki 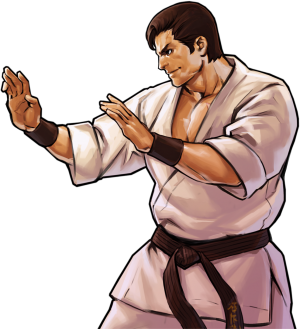 In this version of his moveset, Takuma gives up his classic fullscreen projectile to focus on a more standard close range play. However, he's somewhat limited compared to other rushdown characters in the game, especially with no DP, average damage, and somewhat limited mixups. That said, he makes up for it to an extent with his cool (but a bit gimmicky) tricks like his armor stance and 2 guard crush specials that allow for different setups. He also still has a "projectile" of sorts, but now it's an invisible burst of energy that hits a specific spot in front of him. He can be an interesting pick if you like his unique moves.

You can add a jump-in to every combo if you start with cl.C or 2~3 lights. Having more range, cr.A is less likely to whiff than cr.B so removing cr.B for consistency rather than cr.A is best.

A bit worse confirm than the previous but a bit more damage. A bit awkward to get both cr.B's to confirm so the previous is preferred.

Main 1 bar bnb with the usual great confirm and decent damage. Do it as cr.B, qcf, cr.A, qcb+A.

Slightly worse confirm but a pretty consistent option if you stick to 2 cr.B's.

Main 3 bar conversion with the usual great confirm but fairly poor damage. Do it as cr.B, qcf, cr.A, qcb+AC.

Slightly worse confirm but a pretty consistent option if you stick to 2 cr.B's. Still poor damage.