The King of Fighters 2002 UM/Andy Bogard 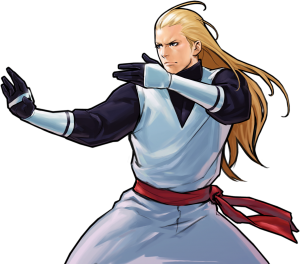 Advice: This throw provides Andy with a great amount of time for proper okizeme. He can run, jump them cross them up with j.D or run up and empty hop into a crouching B (for a low attack) or empty hop into his command throw (hcf+P).

Shippu Oh Ken - during Zan Ei Ken, (qcf + A/C)
This is his follow up after a blocked or hit db~f + P. It's best used in combos since it's unsafe on block (it does provide a bit of pushback but not much). There isn't any visible difference between using the light or heavy punch versions. On hit it gives the opponent a tech-able knockdown from almost a full screen away.

Combo Advice: Can be canceled from the first hit of his df+A, any and both of his hits of the cl.C and his crouching C.

Combo Advice: It seems to combo only from the first hit of his cl.C and his crouching C.

Combo Advice: This dp can connect from his crouching and close A, B, and first hit of his cl. C. Midscreen, the down, down + P follow up will whiff if you play an extra normal in from of the canceled one (example, cr. B, st.B, dp+A/C) or if it is spaced too far (crouching C into dp+A/C).

Combo Advice: The light kick (B) version seems to only combo in the corner from a 2-hit cl. C or a cr. B, df+A combo.

Combo Advice: You can combo this throw after his close A, B, and both hits of cl.C. Also, it can connect from his df+A, and crouching C. The special moves you can hit the opponent in mid-air is his db~f+C (the qcf+C follow whiffs), a brief dash then dp+A or C (all hits must connect or the hard knockdown wont activate) and a few hits from his hcf+D (one hit from hcf+B). Command moves he can juggle with are his df+A and f+B.

Combo Advice: This move can only cancel after a canceled f+B in the corner.

You can add a jump-in to every combo. It needs to be fairly deep if you'll go for a low chain.
You can replace cr.B, df+A(1) by cl.C or cr.B, cl.B in every combo.
You can add a cr.B before every cl.C, not cl.C(1), for a 3f link low starter, though you'd then only have one hit of cl.C to cancel.
cl.C's 2nd hit whiffs on crouching (Benimaru, Yuri, Ralf, Clark, Vice, Mature, Bao).

Nice light string to mash out of pressure and score some chip. 10~18%.

Very limited and fairly rising conversion compared to his other options. With dp+A, preferred for safety, 18%.

Somewhat okay on block so a decent option to default to if you can't hit confirm off cr.B, df+A(1).

Andy's very versatile meterless bnb offering knockdown or air reset routes. Stop at the first df+A on block. cl.D is a bit tight to land outside of the corner so j.C is preferred in the air reset route. With f+B, d,d+P ender, 32%; with run df+A, j.C, 36%.

Good combo to check the opponent in the corner rather than going for damage. 30%.

Decent damage but lacking compared to the next route unless you want the knockdown. With rdp+D,

Corner reset route, good damage and room for mix-up after cl.D. Stop at the first df+A on block. nj.C is easier to land but cl.D does more damage and better frame advantage. 37/40%.

Not interesting by itself but you can start delaying f+B to get the non-cancelable but overhead version for a mix-up. 29/31%.

Inconsistent and poor damage. Doing super off df+A is a bit awkward and you'd want to avoid it more often than not. 27%.

Somewhat underwhelming 2 bar conversion midscreen. The only case where qcb,db,f+D does more than qcb,hcf+P outside of corner is if you use db,f+A and super cancel as soon as possible. Doing that gives 43% and slightly more if you reach the corner before the end of the super.

Decent corner conversion but only against standing characters since hcf+D doesn't fully connect and combo on crouching opponents. 44%.

Good way to dump meter on easy damage. Does a bit more if you slightly delay the super. 52~55%.

Optimized but fairly hard version of the previous. You need to land df+A low for full damage. 60%.

Great corner conversion but only against standing characters since hcf+D doesn't fully connect and combo on crouching opponents. 70%.

Very expensive but good damage to show for it if you need to kill. 69%.