The King of Fighters 2002 UM/Athena Asamiya 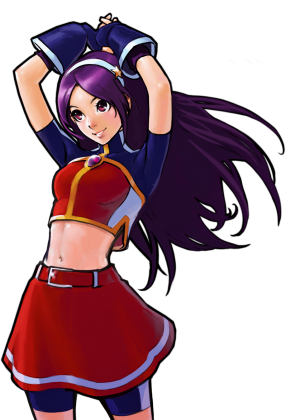 Psycho Sword - on ground or in air,

Shining Crystal Bit - on ground or in air,

Shining Crystal Bit - on ground or in air,

Athena is a very fast character that can play zoning, space control and aggressive / pressure heavy. She excels at zoning though due to having a fireball and a pretty good DP. Some of her normals are excellent (st.C, cr.C, st.D, j.D). Moreover, her teleport as well as forward B cancelled into Phoenix Arrow (air qcb+K) can help her setup pressure off her fireball frame advantage. She has some nasty instant overheads conversions and drawing out the most of her max mode potential is surprisingly challenging.