The King of Fighters 2002 UM/Leona Heidern 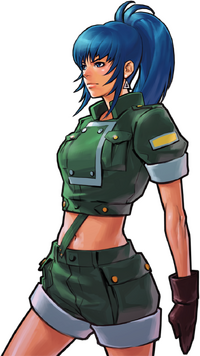 Reminder that old KoF hit counter is a bit dumb, it'll always reset after grabs and "hits that don't do damage" like rdp+K. To practice the links after rdp+K put counter on in the training menu and if the counter prop pops more than once then you did drop the link, if it doesn't you're fine.

Less range but much safer on block than the previous route. Use it point-blank if you aren't confident in your hitconfirm or your cr.B, cr.A chain. Remove cr.B if not point-blank.

Extension of the main bnb if you can land a cl.D in a scramble or as a punish. rdp+K is minus on block but the pushback can make it awkward to punish without proper labbing. rdp+K to cr.B is an 11f link.

Shorter and more damaging version. On the very tip of cl.D(1), the cancelable part of cr.C will miss making it unsafe on hit, minor issue you can fix by just micro walking before cr.C. rdp+K to cr.C is an 11f link.

Good corner route. rdp+K to cl.D is an 8f link.

Nice and simple 1 bar. Default to this in a scramble, a tight punish or after a jump-in. Stop at f+B on block to be mostly safe. Use cl.D for a less damaging but easier and better confirm.

Great 1 bar extension, easy, damaging, and doubles as set-play with the bomb on the opponent about to explode and them having very small chances to stop it if you just super jump away.

You can always use cl.C(2) instead of the cr.C before a max run for more damage but harder max run. Note that you can't do cl.C(2), BC run, cl.C(2) but only cl.C(2), BC run, cr.C instead.
You can use d~u+A instead of d~u+C in max combos but it tends to be more restrictive and harder on top of doing less damage. Only use it if you feel uncomfortable with d~u+C.

You need to do it exactly this way to get the explosion within the combo, thus the best damage. The best not being much, 53%.

Much harder but getting the explosion within the combo makes this much more damaging. You can use cl.D(2) instead of cr.C to get 2 hits to confirm into the max run but you'll then need a longer run. 71%.

Much harder, a bit more damage but mostly a better confirm. You can use cr.C instead of cl.C(2) if you find it easier, it's the same damage. 74%.

Nice and simple 3 bar. Pretty meh damage so default to this only if you don't want to risk max. Stop at f+B on block to be mostly safe. Use cl.D for a slower and less damaging but easier confirm. 48%.

A decent way to combo into HDSM, transforming you into O.Leona for the rest of the match. Classic recipe of a Leona comeback. Use cl.D instead of both cr.C for an easier but less damaging combo. 64%

Great 3 bar extension, easy and damaging. On the very tip of cl.D(1), you can stick to cl.C(1) or just walk up before doing cl.C(2) to keep full damage. Check the specifics tab for details against crouchers. rdp+K to cl.C is a 7f link. 67%.

No problem with this combo in the corner but if the opponent is crouching midscreen, only cl.D(1), f+B, air qcf hcb+AC is guaranteed to connect on everyone ... except crouching Bao, naturally. If you try something else, the SDM could whiff, 3 bars lost and you're left open for a punish.

Aside from Ex Takuma, Ex chars behave the same as their regular form.

Excellent damage but not much of a confirm so best after a jump-in. You have to do everything very fast or you'll lose the extra damage from Explode. You can add a cr.A or cl.D(1) after rdp+K. Do the charge cancel as db, ub+C, (C) f+D(2). 76%.

Does less than the 2 bar version because the explosion is lost, use the DM instead of the SDM. 70%.