The King of Fighters 2002 UM/Orochi Yashiro 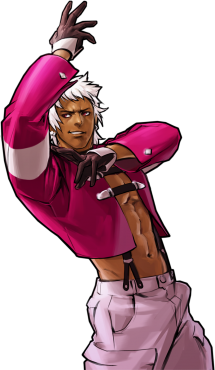 Written as is you can add a jump-in to every combo though you may need to remove a cr.A if the combo starts with one.

Replacing cl.C and f+A by cl.D and f+B does more damage but also more pushback, making them harder to fit with a jump-in.
Similarly, you can replace the first cr.A of a chain with cr.B for a low starter but the timing for cr.B, cr.A is annoyingly awkward so it's not recommended.

cl.A whiffs on everyone crouching but Whip and Chang so make sure the opponent is standing or you're far enough to get the more reliable far A, like after 2 cr.As.

If the opponent is standing and you use cl.A, you can link hcb,f+P / hcbx2+P/AC after it instead of canceling, which may be a bit easier.

Good and easy poke string. hcb,f+A does more damage but it's whiff punishable if you don't properly confirm into it. If unsure, stick to st.B, in which case you can add a cr.A. 23% with hcb,f+P.

Your main, very reliable bnb. hcb,f+P does more damage but hcf+B has better carry and oki, stop at f+A on block. 22/28%.

Not a low conversion which sucks but still practical since cr.A is fast and has decent range. Do it as cr.A, hcb, cr.A/st.A, hcb+P or incorporate cr.A/st.A in the first hcb. 30%.

Somewhat decent 1 bar conversion with great oki. Not much damage gained over the meterless version. 34%.

You can replace cl.C, f+A, BC run with f+A, BC run for a good overhead starter into the same max routes.

Barely more damaging than the 1 bar version, not worth the extra meter. 38%.

Awfully unreliable and little damage but your one of your rare options from low. 30%.

Interesting grab conversion and your only route to combo into HSDM. One way to time f+A is to do cl.D and whiff cancel it into f+A. You need to do this fairly close to the corner. 50%.

Optimized version of the previous that can start more around midscreen. One way to time the first f+A is to do cl.D and whiff cancel it into f+A. 55%.

This is the standard and most common mixup. If you keep walking underneath the entire time, you will pass through them...and that itself is pretty obvious for the opponent to see. However, if right before the opponent lands, you stop walking, you will not pass under them and can hit them from the front. If done right, it can look very ambigious.

This setup needs to be done exactly as stated or it won't work. If done properly, Yashiro's forward jump D will be facing backwards (even though opponent is positioned behind him) but since it has a crossup hitbox, it will hit behind from behind. Very ambiguous, though if done too often, loses effectiveness.