The King of Fighters 2002 UM/Chris 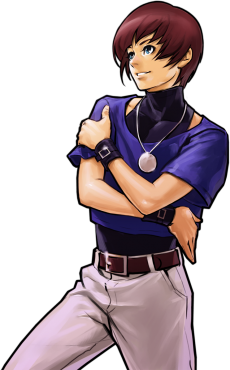 Chris is a very good and very strong character, he has a lot of very intuitive tools to use and a fairly linear gameplay. He is a high speed, high mobility character, with very strong cross-ups, mix-ups and vortex potential, although he relies on those last two traits to get past his average meterless damage output. He has a great neutral, his j.CD is a great button that is difficult to challenge, and his f+A, f+B and df+B are incredible tools both for whiff punishing and to start his max mode conversions. He also has a pretty decent DP and a hopping command grab that can let you fully convert pretty much anywhere, overall making him extremely scary and hard to fight.

Advice: This throw gives Chris multiple okizeme options and mix-ups. He can either:

- Step back slightly (or stay in the same spot depending on the character), then superjump and cross them up with j.D
- Empty hyper hop into a crouching B
- Step forward slightly then regular jump D to cross-up
- Dash forward a bit then roll for an ambiguous roll set-up
- Any empty jumps into a throw if the opponent rolls

Combo Advice: Can be cancelled into any of his special moves and easily into Max Mode.

Combo Advice: It's best to resort to using Chris's f+A in the middle of combos because it pushes him forward more eliminating the risk of push-back and not connecting properly. But this attack in Max Mode can be cancelled during the first hit which may open up further combo opportunities. This is also a safe move to activate into Max Mode with especially if both hits connect on a crouching opponent, and you can bypass into his hcb+K as hcb+BC.

Combo Advice: Even though not cancel-able not in Max Mode, you can chain his cr.B, cr.A into the slide to end with a low, while mixing it up with cr.B, cr.A into his f+B for an overhead ending attack. Also, while in Max Mode it is possible to cancel this attack into his special and super attacks for an easy low-hit confirm surprise.

Combo Advice: Only use the A (light punch) version at the end of combos. For example cl. C, f+A, qcf+A or cr. B, cr. A, f+A, qcf+A. It causes a knockdown which a lot of his other connecting combo finishers do not cause.

Combo Advice: This move combos only from his heavy attacks and his f+A command normal. If you are going to use this in a combo, be sure it connects and try to super cancel from it.

Combo Advice: This move combos only from his heavy attacks and his f+A command normal. Not recommend in combos at all because of its slow start-up and bad recovery.

Combo Advice: Even though you cannot combo the Glider Stomp into anything, you can freely juggle the opponent afterwards, especially with the light kick (B) version. He has a very easy 40% combo juggle which starts from his light kick version of this move.

Combo Advice: Best to combo after a cl.C, f+A string or crouching B, crouching/standing A, f+A string which is bit more difficult.

Combo Advice: Easier to combo from the combo starters explained using his Chain Slide Touch but has lower amount of damage.

Combo Advice: You can combo this in the same way like his Chain Slide Touch DM, but keep in mind that it may fully miss or not connect all 15 hits if cancelled too late because of its skinny hitbox range.

Combo Advice: Keep in mind that you can only cancel into this move from cancel-able normals and command moves, and it's best in the corner because of the push-back it gives the opponent mid-screen.

You can use st.A instead of cr.A for an easier f+A cancel but it whiffs on crouchers so cl.B is preferred as substitute despite its limited range.
You can use cr.C(1) or far C(1) instead of cl.C. The former doubles as an okay AA and the latter offers a bit more range.

Easy and safe meterless string off cr.B to get some chip or keep the opponent away.

Good close range conversion. dp+B's knockdown and extra damage are valuable but f+B is less strict in spacing/timing and is safe on block so best to default to. 14% with f+B.

Main meterless bnb. Default to qcf+A on hit but it's unsafe on block. hcb+A is pretty safe on block but there's a gap in between f+A and hcb+A for the opponent to dp. 19% with qcf+A.

Great dive conversion with hard knockdown. It's also possible from heavy dive hitting on the tip. 40%.

Main 1 bar conversion though pretty inconsistent on crouchers. qcfx2+A is faster and more damaging but qcbx2+B has a tiny bit more range which helps but it's still prone to whiff. 30% with qcfx2+A.

Main max conversion. Decent damage for a short and simple combo. 45% with both df+B.

Easier version, no need to walk nor run. 41% with both df+B.

Chris' dp+A and j.D give him plenty of chances to land this but it's somewhat inconsistent and doesn't do more damage than the main option, useless. 45% with df+B.

Easy 3 bar conversion, much more reliable than the 1 bar version but pretty expensive for little damage. 43%.

Pretty tough but if you can do it the damage is decent. 57% with df+B.

Chris' dp+A and j.D give him plenty of chances to land this and it's much easier than the previous so it's good to know. 50%.

Easier and more damaging corner version of the transform max combo. 58% with df+B.

Fancy but more damaging than the easy version. 63% with df+B.