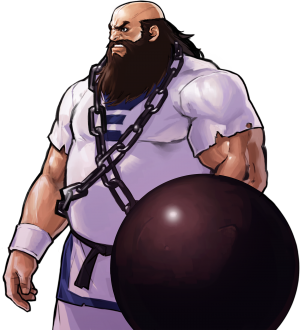 Chang is a somewhat unorthodox character. His strengths are mostly related to his reach with his chained ball. His j.CD is by far his best normal, mostly due to its active frames and reach. It is quite hard to challenge and it is mostly challenged by invincible reversals. Aside from j.CD his gameplay revolves around trying to approach with his slide (df+A), erasing fireballs and putting pressure with his ball spin (mash A or C) and with the clever use of his supers. His combo potential and conversion damage is very limited, but he makes up for it with burst damage when he lands his supers. He has a command grab and generally his movement speed is very limited.

Blowback st. CD - Chang throws his belly at the opponent. Nice range but not cancel-able j.CD - Chang swings his ball at an diagonal angle toward the opponent. Good for maintaining space, and pressure. Whiffs on crouching opponents if released too closely.

Meterless bnb as a decent hitconfirm into mashball. You can cancel mash immediately with ABCD for better frame advantage or keep it active to pressure the opponent's guard on block. Preferred bnb near the corner. 25%.

Other meterless bnb with better damage and hard knockdown but much more unsafe on block. 27/28%.

cr.C is too slow and lacking range for this to land too often. 18%.

Good way to take advantage of cr.D/st.CD's range to make it safe on block and convert a hit. Characters with a recovery roll faster than Billy's -for cr.D- or Iori's -for st.CD- can do that and avoid d,d+K. To immediately cancel mash, it's preferable to mash ABCD together instead of just A/C. 17/18%.

Only good damage you'll get for meter without being punishable on hit but cr.C is too slow and lacking for this to land too often. 48%.

Random super conversion. However, it is punishable on hit so best kept to end the round. 64%.

3 bar conversion with a decent hitconfirm. Punishable on hit and poor damage not worth it. Input it as cr.A, qcf, cr.A/cl.B, qcf+AC. 40%.