The King of Fighters 2002 UM/Robert Garcia 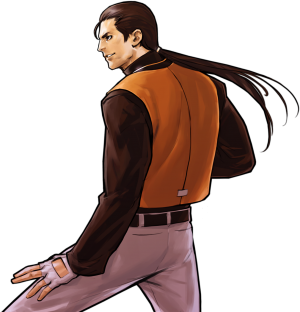 Kick of the Dragon - close,

Super Cancel Advice: If you ever have the meter to super cancel the most reliable options you have are any version of Ryuuko Ranbu or his Reverse Dragon Fang DM.

Combo Advice: If you ever land a counter hit low to the ground, Reverse Dragon Fang DM can connect as well as his Ryuuga.

Combo Advice: If you even land his Kyokugen Kick Dance this is almost always the preferred combo ender.

Combo Advice: Use the A (light punch) version of it from his close D (1)...super canceling is a waste of time.

You can always add a jump-in unless mentioned otherwise. In which case, remove a cr.B if the combo starts with one.
Always use hcf+D for the proximity unblockable to get the safe on block cl.D when it can't come out instead of the very unsafe f+B.
If you're near point-blank, f+A whiffs midscreen on standing Bao, crouching Choi and in the corner on Bao, Choi, Shermie, standing(Kula, Vanessa , Hinako) and crouching Jhun.

Simple meterless bnb. Remove a cr.B to add a jump-in. Despite worse range and damage, it's best to default to dp+A for consistency if the opponent is crouching. More on that in specifics. 16/19%.

The crouchers dp+C will reliably connect on are:

Bnb best as a punish or after a deep jump-in. If you don't mind only getting one hit of dp+C you don't have to run but can just walk before doing f+B. You can omit cl.D or use cr.C instead of cl.D(1) for a faster and more damaging starter but less range than cl.D and worse on block. With both dp+C hits, 28/31%.

Good overhead conversion. f+A needs to hit somewhat close but its good range and being safe on block makes this very practical. This works on crouching(Bao, Jhun) only in the corner. 15%.

More damaging hcf+D conversion when in the corner. 35%.

Jump-in friendly 1 bar bnb. Use a deep jump-in on crouching(Chris, Mature, Vice, Jhun) and don't use one at all on crouching Bao. Cancel f+B into qcf+A on block. 35%.

Best as a punish or after a deep jump-in. Less damaging than the previous but safer on block. You can run into f+B before qcfx2+K for 4% more damage, without run in the corner. You can omit cl.D or use cr.C for a faster and more damaging starter but less range and worse on block. 30%.

Basic max conversion. Use cr.C instead of cl.D(1) for a faster and more damaging starter but less range. 40%.

Decent damage but somewhat tight to time if not in dead corner. If you omit cl.D(1) you can do this anywhere on screen. 40%.

Basic max conversion. Use cr.C instead of cl.D(1) for a faster and more damaging starter but less range. 57%.

Fancy HSDM conversion, about the only way to combo into it. 67%.