The King of Fighters 2002 UM/Mature 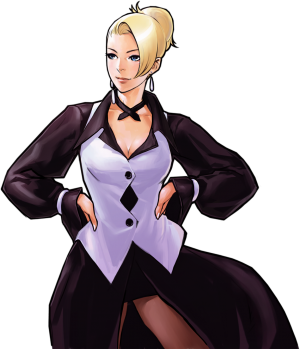 Mature is a character that uses her fireballs to setup her game but can also play a pressure based game with her good pokes. Her cl.b and j.b (both 2 hits) make confirming with her rather easy. She can convert into her rekkas from lows and close heavys.

She builds decent meter on block and she has easy conversions into super from most of her normals. Generally a rather safe character, she can struggle to anti air upclose though use s.a and cr.C when there's time for a bit of startup to it.

(more to be updated)

You can add a jump-in to every combo but if there's a light chain, you'll have to remove one light.

hcf+B restarts the hit counter -old game quirks- but those are real combos, no worries.

Basic meterless low conversion. Use qcb+A or stop at cl.B on block.

Lengthier low conversion. You can replace cr.A by st.A but note that it whiffs on every croucher but Ramon, Whip, Seth, Xiangfei, Maxima, Daimon and Chang.

Nice and long 1 bar confirm to rely on. Omit st.A on every croucher but Ramon, Whip, Seth, Xiangfei, Maxima, Daimon and Chang.

You can use cr.Bx2, far B(2) (BC) far C instead of cl.C (BC) far C as a low starter for every max combos.
You can sometimes use qcb+D instead of the written qcb+B but it can make the combo less consistent for only 1% more damage.

Less damaging but easiest and most consistent route she has.

Low version of the previous route and also only reliable route off far B(2) (BC) far B(2).

Omit qcb+B if you want to use far C's 2nd hit for an easier starter.

A tad less strict in spacing than the one above.

A route that is a bit less spacing dependent, as long as you don't start too close to the corner, it works.

Optimized version of the previous route.

To make this slightly easier, SC on qcb+B's 2nd hit. Using qcfx2+A as an ender makes this way more consistent and anywhere.

★ Replace the super ender in any 2 stocks combo by qcfx2+AC.