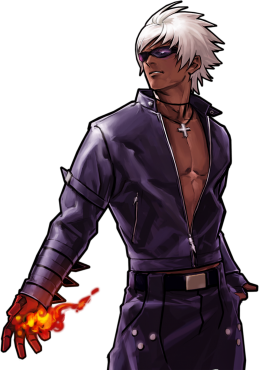 Minutes Spike - on ground or in air,

K' is a character with an enormous amount of space control due to his Eins Trigger (qcf+P) fireball move that can be followed up with an anti air move (f+D) that can also link into his qcfx2+P super from anywhere on the screen, a travelling fireball (f+B), a forward-moving kick for reliable damage and good corner carry (qcb+K), or used just by itself with no follow-up as a threat. K' also excels at close range pressure and some of his normals can be really oppressive (his j.D and cr.B are extremely good). He also has an an overhead-hitting commmand normal (f+B) for a mix-up that is extremely difficult to react to (although it is quite punishable on block) which he can cancel into air qcb+K for a knockdown. K' overall has very good damage and corner carry.

If you're in dead corner, qcfx2+P is very finnicky to land so qcf,hc+P is preferred.

Outside of the corner, you can cancel dp+A on its second hit if you use qcfx2+P.

To land qcf hcb+P/AC midscreen you have to delay the last two qcb+D > qcb+D making the combo unnecessarily harder. Keep it for corner.

Stopping at qcf+A/C is always your safest option on block. You want to be able to confirm from there at least.

Combo from a confirm, pushes back too far so not ideal to maintain pressure but is safe on block unless the opponent GCRolls. If done closer to corner, you may be able to add qcb+K at the end of the combo but it depends on spacing.

Main midscreen confirm BnB. Good carry. If starting with a jump-in, can do 2 cr.Bs at most. Like with all of his strings, stopping at qcf+A is the safest option on block.

Good option when you don't have the leeway to hitconfirm. qcf+C's faster projectile follow-up will combo from further while staying pretty safe on block.

Combo from a very fast overhead with a knockdown. Great for mix-up.

Best damage corner combo. If starting with a jump-in, use do cr.Bx2 or cl.C(2), you won't get the dp+C ender with more than that. st.CD finisher gives a bit more range than dp and less damage but can also be canceled into qcb+D > qcb+K for a bit more meter build.

Version of a similar route for 1 bar. If adding jump-in, qcf hcb+P will whiff, so qcfx2+P should be used in that case.

An easy corner combo for excellent damage. Omit one cr.B or f+A if you add a jump-in. Doesn't work on Angel.

An alternative if you have a hard time with the loop but underwhelming as it does less damage than his best 1 bar combo.

Side switch midscreen. You can use dp+C for the first dp to make the spacing for dp into DM a little bit better.

No side switch midscreen. You don't need to cancel the first qcb+D~qcb+D in corner.

Remember to walk/delay the first dp+A to get the 2 grounded hits.

Easier and a bit less damaging version of the previous combo.