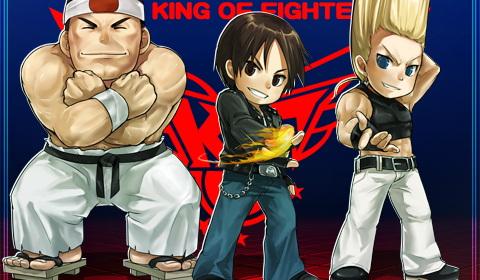 The King of Details #4: Whiff and late cancelling cancel buffering trick
By PhoeniX

Today I’ll discuss some special properties of cancels in KOF.

Whiff cancelling
Unlike in most fighting games, if a move is cancellable, it can be cancelled regardless of whether it hits or not. Therefore it is possible for K’ to do cr.D xx qcf+A with or without hitting .

This opens up several strategic possibilities that are not normally available in other fighting games. If you whiff a move that has a good hitbox, but has bad recovery, you can either shorten this recovery or cover the recovery with a safe special.

This allows you to cover several options at once during neutral game. If you whiff cancel a sweep into a special that has a more upward hitbox you are essentially covering the full space in front of you.

But there is a way to retain these special properties. You do this by cancelling into the command normal late.

Whenever a move connects, either on hit or block, both characters freeze for a short time this is called ‘hitstop or hitfreeze,’ a late cancel is done by inputting the command normal just after this hitstop, just when the opponent starts moving backwards from the knockback.

This is a useful technique, especially for overhead command normals which tend to have a very long startup, which makes them prone to counterpokes. By late cancelling into a command normal, you will at least secure part of the startup to be covered since the opponent will still be in blockstun, essentially creating a frametrap from a normal into a command normal.

Chain cancelling
A chain cancel is a property that some light attacks have. If a light attack has a chain property, it can cancel into any other light attack. This is not true for all light attacks, which explains why you can cancel Whip’s cl.B into a cr.B, but you cannot cancel cr.B into cl.B or another cr.B.

I blinked, rewound, looked again. Yes, that was what was happening. This puzzled me, as cr.B only chain cancels and does not special or super cancel in 98 or 2002. How is this combo possible?

So the actual combo you see happening is cr.BB st.A (whiff) xx Super. So I wondered, why would someone do a combo so convoluted if you can just dor cr.BBA xx Super?

The same input gives two different combos depending on whether your opponent is standing or crouching.

The reason you would want to do this is to simplify execution. If you do the regular combo cr.BBA xx Super, you have to input the 2xqcf+P quite quickly after cr.A. This may lead to cr.A sometimes accidentally coming out as st.A which will whiff on crouching opponents, resulting in missing the combo. With this input trick, it does not matter whether you execute a cr.A or st.A as it will hit a crouching and standing opponent equally.

There are more characters that can use this technique. Joe can use it to hit cr.BB st.A (whiff or not) xx qcf,hcb+A. The timing on this is quite tight, but it gives you a lot more time to buffer qcf,hcb+A than if you would try to do cr.BA xx qcf,hcb+A. Heavy D! can technically do it with cr.BB st.A (whiff or not) qcb,hcf+A as well, but this requires a 1-frame timing so it’s not much of an improvement execution-wise.

There’s one other, pretty difficult to execute application that is quite useful if you can do it. Once I found out about this trick, it suddenly struck me that I now understood what Dune was doing in his Orochi Yashiro tutorial video for KOF2002UM at 8:05.

This is obviously a useful tool to learn for Orochi Yashiro, as it allows him to do very good damage off a low attack, automatically making him a lot more threatening.

It is also possible to do the above trick with O. Yashiro’s hcb,f+A throw.

I obviously have not explored all applications of this trick and I am curious to see if any of you guys can come up with other good applications.

I have taken the time to make a small tutorial video that illustrates this buffering trick.

I’ve taken two cases. Mature doing cr.BB st.A xx super, and O. Yashiro doing cr.B cl.A xx hcb,f+P. the split screen shows the combo on a standing opponent on the left, and on a crouching opponent on the right. The second part of the video plays both combos in slow-motion with the specific inputs shown at the bottom.