The King of Fighters '98 UMFE/Benimaru Nikaido 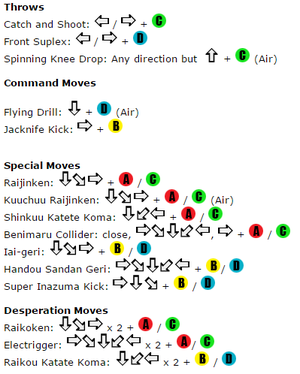 Benimaru is a character well-equipped for both midrange poking and rushdown. He has a great set of normals to keep the opponent in check so he can go in and run offense. His aerial control is especially good because of his long-range DP and great air-to-air buttons. Once he is in, he has access to a strong low presence, a command grab that lets him run oki afterwards, and good jumping buttons for highs and crossups. Benimaru's main weakness is his lack of long-ranged tools to fight with, and his floaty jump, which can be a double-edged sword.

Benimaru slightly prefers some aspects of Advanced Mode, but overall is a character that can work well in any mode.

King of Fighters 98 UM FE: Benimaru Guide by Mash It Out