The King of Fighters '98 UMFE/EX Mai 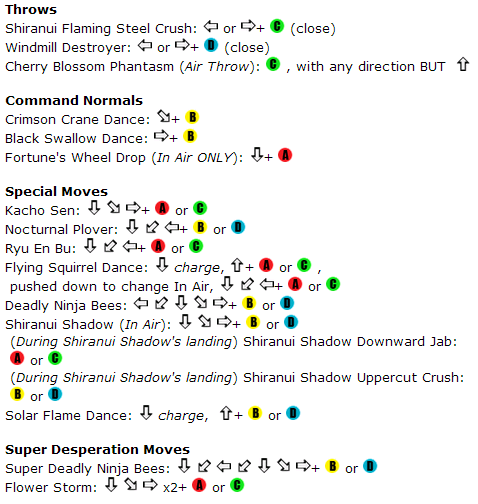 EX Mai is a poking character with some above-average movement options. In neutral, she has access to some great pokes and specials that make her hard to approach. She has decent anti-air options as well, to catch people trying to jump over her pokes. In the air, she has a divekick move that she can use to change her aerial trajectory, making her harder to anti-air. She has an invincible reversal as well, so her defense is decent, although it does require a charge. Her primary weakness is that her mixup game isn't that strong, as her overhead is quite slow and her low confirm isn't great.

d~u+K now has invincible startup, but less damage and longer recovery as a result

Flower Storm: qcfx2+A/C (can be held)

cr.B, st.A, (qcb+K), qcb+C
Most damaging meterless combo from a low starter. The qcb+K, qcb+C has to be done fast or the last qcb+C will whiff. You can choose to just do the qcb+C for more consistency at the cost of a small amount of damage.

(j.X), cr.C, hcf+D
More damaging than the above combo, but much more unsafe if not confirmed.