what a horrible little man 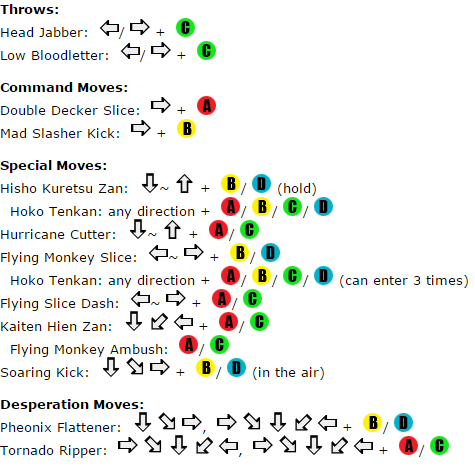 Choi is a very unique character due to his atypical mobility. Choi's regular jumps go higher and further than anyone else's, and his hops are at most characters' full jump height. In addition to this, he has specials that allow him to back away to end of the screen very fast and one that lets him fly in 8 directions in the air. This makes Choi good at a hit-and-run kind of playstyle. Choi's range, however, is the shortest in the game, and if he's not right next to the opponent he probably can't hit them with anything that's scary. Offensively Choi relies on light chains and crossups to score hits, and a divekick for pressure. Choi's weaknesses are a lack of a reversal, and that his jumps can be a liability sometimes since it's hard for him to run a standard offense.

* Same as the Hoko Tenkan move description below, except Choi starts out doing a horizontal one by default and then gets to do three more after that.

(j.X), cl.C/cr.C, f+B, (st.A), qcf,hcb+B
Can be done after a jump-in, although this is difficult, especially with buttons other than j.C. st.A is optional, you can go straight into qcf,hcb+B after f+B at the cost of a bit of damage.

King of Fighters 98 UM FE: Choi Guide by Mash It Out