The King of Fighters '98 UMFE/Leona Heidern 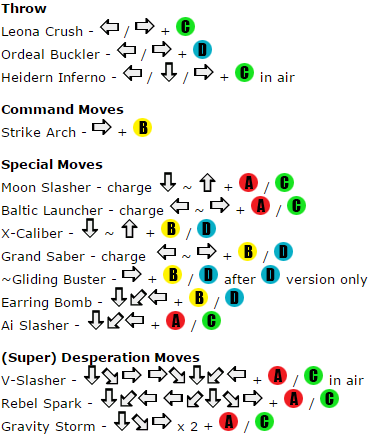 Leona is a fairly unorthodox character whose playstyle is hard to pin down. On one hand, she has good tools to control space in neutral, including solid pokes, excellent air normals, and some specials that can anti-air and occupy a lot of space in neutral. She also has an air DM with lots of invincibility, letting her control the air and whiff punish grounded stuff with it. On the other hand, she also does well with close-range pressure, with some good low confirms, an overhead, an instant overhead, and specials that let her maintain or reset pressure fairly safely. As a result, there's plenty of room to find your own playstyle with Leona, altering your approach based on personal preference and your opponent's habits. Leona's weaknesses are that her long-range tools are all slow and unsafe, and that she lacks a meterless reversal.

Instant overhead to DM and its input glitch

Full neutral jump D is an instant overhead that can hit low crouchers. It is also cancellable to V-slasher. With some clever buffering, this gives you a powerful instant overhead. However, if your last jump was a short jump, then the input to get it to come out becomes one frame tight. The normal jumping D comes out in its stead, which does not work as an instant overhead. If your last jump was a full jump, or if you haven't jumped yet, then full neutral jump D comes out as normal and can be used as expected.

King of Fighters 98 UM FE: Leona Guide by Mash It Out

The King of Fighters '98 UM Final Edition: Iori/O.Yashiro/Krauser vs. EX-Yuri/Leona/Eiji