The King of Fighters '98 UMFE/Takuma Sakazaki 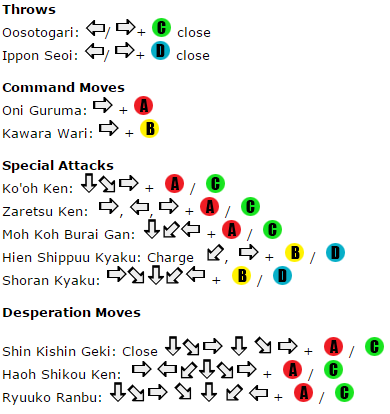 Takuma is a versatile character that can both zone and rush down pretty well. For zoning, he has a good backdash for gaining distance and a fast, high-flying projectile to control space. He also has access to a good anti-air button in st.B and a great anti-air DM. Takuma also has good anti-zoning tools with a projectile reflector and a fast projectile DM. When going in, Takuma also has strong options like an overhead, a running command grab, a good crossup, good low confirms, and a proximity unblockable DM. No matter what strategy he uses, Takuma also gets reliably high damage. His main weakness is that he's very meter-reliant for both his best damage and his most consistent anti-air; he also lacks a meterless reversal option.

cr.Bx1-2, cr.A, f+A
Alternative low combo, has a delayed cancel into f+A as opposed to an immediate one. Does less damage than the previous one but grants hard knockdown with great oki.

(j.X), cl.C, (f+A), qcf+C
Easy and safe combo from jump-in, no need to hit-confirm. f+A should be omitted if the pushback is too much.