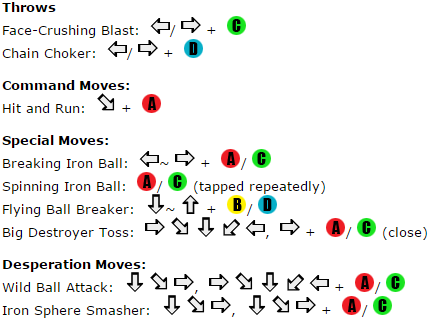 Chang is a character defined by his strong long-range normals that he can use to shut the opponent's movement down and pressure them from midrange. This will push the opponent into the corner, where Chang can run strong pressure with his high-priority jump buttons and his ball spin special move for chipping. Chang can be really strong when he's in control of a match, but he is equally weak when not in control. His large size makes it easier to hit him and mix him up, and his slow speed means that it's hard for him to approach an opponent who is in control. On defense his buttons are slow, and his only real invincible reversal is a DM that carries a lot of risk.

(j.B/D), cl.A/cr.A/st.B, hcb,f+P
This is your main combo route with Chang, only works at close range. Can be combo-ed off a jump-in.

King of Fighters 98 UM FE: Chang Guide by Mash It Out