The King of Fighters '98 UMFE/Orochi Yashiro 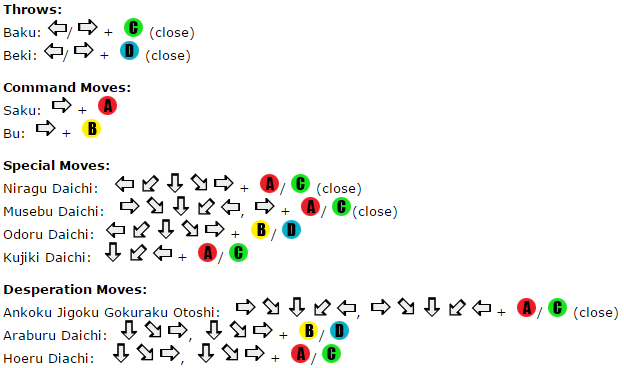 Orochi Yashiro is a grappler with a set of great long-range normals, especially st.B and j.D. These let him control space and lock the opponent's movement down, so he can go in and start his mixups. Once in, he has access to multiple mixup options like lows, an overhead, and 3 command grabs. His weaknesses include a lack of safe specials to cancel into, a lack of a dedicated anti-jump tool, and a lack of meterless fullscreen options.

cr.B, cr.A/st.A, hcbx2+P
You can input the second cr.A/st.A during a hcb then do hcb+C for an easier cancel; if you're starting the combo with cr.A instead of cr.B, don't input the second A too fast, otherwise you may accidentally get qcb+A.

j.A, ABC, cl.D, f+A/f+B, hcb,f+P/hcf+B/hcbx2+P
High and fast jump-in combo enabled by Quick MAX. You can go into hcb,f+P or hcf+B to stay in MAX Mode or hcbx2+P for a slight damage increase.

King of Fighters 98 UM FE: Orochi Yashiro Guide by Mash It Out