The King of Fighters '98 UMFE/Shermie 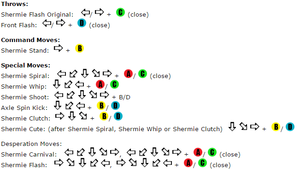 Shermie excels at close to medium range. At medium range, she has a some solid pokes and anti-airs to control a lot of space. Her jump arc, speed, and buttons also allow for aggressive approaches in the air from this range. At close range, her options include command grabs, a low confirm that combos into those command grabs, an overhead, and the aforementioned jump/hop pressure. What Shermie lacks are long confirms, and a solid reversal to get her out of pressure herself. These are minor weaknesses, since the confirms she has work well enough, and thanks to her reach and anti-air capability she can still hold her ground when cornered.

cr.B, hcf+P
Basic low confirm into command grab. Since this is a link, it should give you just enough time to confirm the hit.

cr.B, st.B(1), hcf+P
More damaging version of the above that does not work on some crouchers.

(j.X), cl.C, hcf+K
Punish for when you don't want to switch sides. Also works after a crossup, but not a regular jump-in.

cr.B, hcbx2+P
Low link into DM. Since this is a link, it should give you just enough time to confirm the hit.

cr.B, st.B(1), hcbx2+P
More damaging version of the above that does not work on some crouchers. hcfx2+P also works here.

cl.C, hcbx2+P
Combo into DM as a punish or jump-in combo filler.

King of Fighters 98 UM FE: Shermie Guide by Mash It Out