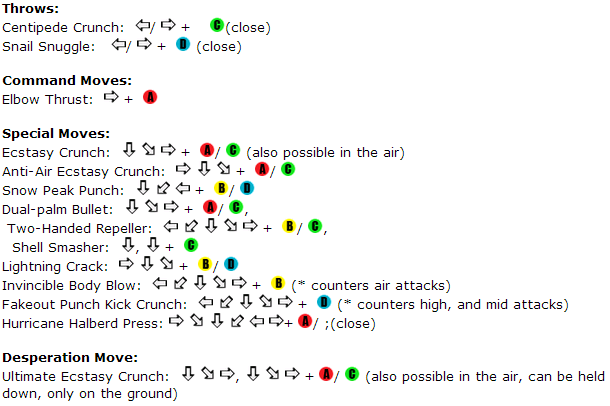 Kasumi is a midrange zoning character. Her main zoning tool is her ground and air projectile, which comes out fast, has good range, and is pretty safe. This move makes it very hard for fireball zoners to effectively zone her out, and allows her to build meter pretty safely. She also has access to counters that she can use to call out predictable attacks. For confirms, she has access to a nice rekka that she can use from both lights and heavies, which gives her a hard knockdown. Her main weaknesses are a lack of mixups and no real invincible reversal.

Ecstasy Crunch: qcf+A/C (can be performed in the air)

Ultimate Ecstasy Crunch: qcfx2+A/C (can be performed in the air)

(j.X), cl.C, hcb,f+P, dp+P/j.CD
j.CD ender must be done off of a superjump. Using a jump-in before cl. C may result in the opponent being pushed away far enough to avoid hcb,f+p.

(optional jump-in) cr.B, qcf, cr.B, qcf+ABC
The quickmax bypass allows either the DM or SDM version of Chou Kasane Ate to combo from cr.B. Very good in every scenario except when in the corner with red health, as a lot of damage from SDM Chou Kasane Ate is lost.

If you're good at reacting to jump-ins, use hcf+B so you can follow up with dp+p. Remember, it only counters jump-ins, so getting baited into doing it can be very punishing.

King of Fighters 98 UM FE: Kasumi Guide by Mash It Out