The King of Fighters '98 UMFE/Robert Garcia 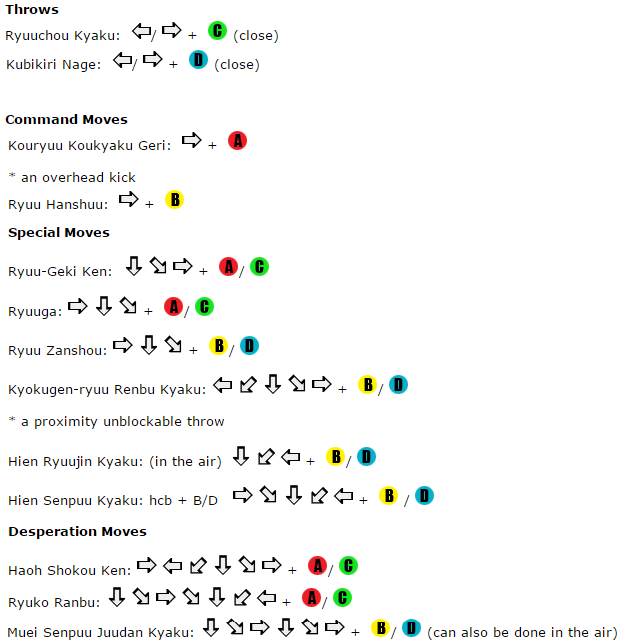 Robert is an offensive character with long reach. He's at his deadliest when he locks the opponent in the corner, where he gets to run strong pressure and mixups on the opponent. His long reach helps him control neutral and score hits that will push the opponent towards the corner. Once he has them there, he can mix them up with lows, a great overhead, and a proximity unblockable. He can also pressure the opponent with his safer special moves. His weakness is his lack of long-range tools, but other than that he is very well-rounded.

cr.B, hcf+B, (cl.C (whiff), f+B), dp+C
f+B can be added for more damage; it is recommended that after hcf+B, you whiff a cl.C and immediately cancel that into f+B, this helps you with timing to get both hits of dp+C to land afterwards and also lets you do this combo reliably at the corner.

(j.X), cl.C, dp+C
A meterless combo from a heavy starter.

Robert's neutral is mainly composed of pokes, like most characters in the game. One poke often underutilized is qcf+A. Not only is it an incredibly fast poking special, but also functions as an anti-air, fireball remover, and a roll check. While it does not allow you to advance like f+A, it still is an active hitbox that you can use to keep the opponent away. Combine it with your normals and you can run a great neutral game.

Robert has great offense in the corner and has good tools to get people to the corner. However, midscreen, Robert can air reset off of hcf+K into st.A for an ambiguous left-right mixup. This allows him to potentially run up after the reset and get any confirm he wants, including another confirm into hcf+K. While this is Robert's most difficult route for damage, it's very good at grinding away health and hard to react to.

Robert's defense is pretty good with 2 DPs, one of which, his dp+P, having invincibility. No real tips other than the previously-mentioned qcf+A being a good lingering hitbox and st.D.

King of Fighters 98 UM FE: Robert Guide by Mash It Out